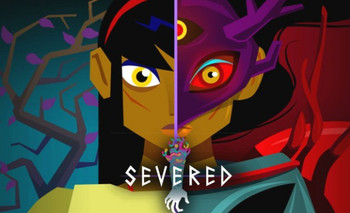 Severed is a 2016 Playstation Vita exclusive by Drinkbox Studios, creator of Guacamelee!. The game was later ported to the Wii U, Nintendo 3DS and iOS devices. You play as Sasha, a young warrior girl who has lost her family and one of her arms, and who finds herself in a mysterious world filled with monsters and oddities. Her goal is to find her family so they can escape back to their own world together. To do so, she must fight through waves of grotesque creatures and explore mazes filled with devious traps.
Advertisement:

And so follows what would have happened if Guillermo del Toro had made Fruit Ninja instead of attempting to make Silent Hills. A heavily Mexican-inspired setting and main character steeped in forboding, alien atmosphere, punctuated by touchscreen-enabled slashing and blocking, itself inspired by Infinity Blade. "Severed" describes not only Sasha's dismembered state, but a core gameplay mechanic where she cuts off parts from the monsters she fights in order to enhance her abilities.