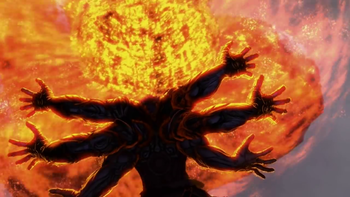 And this is during the first boss!
Asura's Wrath is possibly one of the most epic action games ever created. The sheer moments of awesome are so great that even the trailers alone are absolutely insane.
Advertisement:

Go here for moments of awesome from the game's many jaw-dropping boss fights.