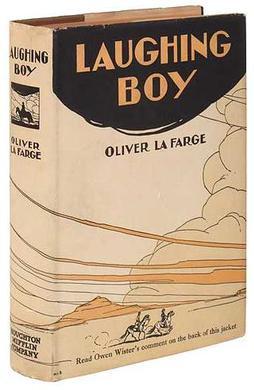 Laughing Boy is a 1930 novel by Oliver La Farge.

It is set among the Navajo people of the American southwest, circa 1915. Laughing Boy is a young Navajo man who grew up in an era where it was still possible for a Navajo to live with little contact of white folks. At a dance, he meets an enchanting young woman named Slim Girl. Laughing Boy is enchanted with her. Soon they are married, despite the opposition of his family, who point out that she was educated by "Americans" (white people) and that she does "the worst thing" for them (that is, she's a prostitute).

Slim Girl, as it turns out, was in fact taken away from her home and educated in white schools, and for a time she was a prostitute. Largely because of all that she is determined to get away from white people and live as a true Navajo once again. She views Laughing Boy as a way for her to get back to her roots and her people—but she's keeping a big secret.

Oliver La Farge was an anthropologist who studied the Navajo for years and had a working knowledge of the Navajo language.