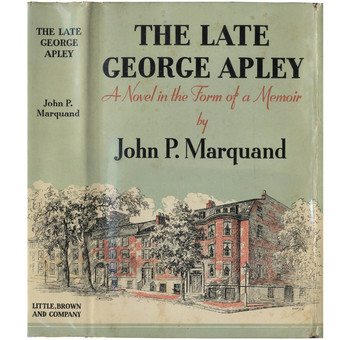 The Late George Apley is a 1937 novel by John P. Marquand.

It is a satire of the insular, stultifying lifestyle of the upper class WASP Apley family of Boston. At the start of the novel George Apley (1866-1933) has recently died. His children have hired George's old school friend Horatio Willing to compose a biography of their father. Willing does so, complementing his own memories and impressions of the Boston smart set in the late 19th and early 20th centuries with numerous quotations from George Apley's own journal entries and letters written and received.

Willing admires George Apley uncritically and is also a social conservative who loves the stuffy, hidebound traditions that circumscribe Boston Brahmin life. But peeking in through the gaps in Willing's narrative is a portrait of a man whose sense of duty and responsibility and what he was expected to do wound up costing him his freedom and happiness.

A case of Tom Hanks Syndrome for John Marquand, who before the publication of this novel was most famous for writing the Mr. Moto series of pulp fiction spy novels.