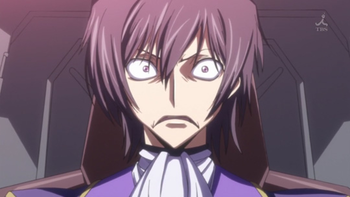 Pictured: An average day for Lelouch.

—A Gag Sub from the second opening of R2

Code Geass is an epic mecha battle between the forces of the Black Knights and the forces of Britannia. It's also infamous for the complete lack of subtlety and restraint that affects almost every scene in R2. Dramatic scenes are constantly ruined by bizarre faces that appear to be drawn by people who were having way too much fun. Also it has bizarre clothing designs by CLAMP that are basically the clothing version of the robots from G Gundam. The general over-the-top nature of the show, especially in the second season, makes it a very entertaining MST piece, depending on how cynical your viewpoint is.

Please note that many of these may also be considered camp or jokes that were taken too seriously. With this show, who knows? Or maybe we're all just too cynical for our own good.