Our protagonist. He's lighthearted, casual and prone to joking around, but he isn't close to anyone apart from Kotori and Yoshino. Beneath the jocular exterior lies a depressed person trying to rework his personality into someone who can form deeper relationships. Fortunately, he's mostly succeeded in this by the start of the series, though he doesn't take people seriously enough.

He conceals the power to "rewrite" himself, strengthening his abilities. 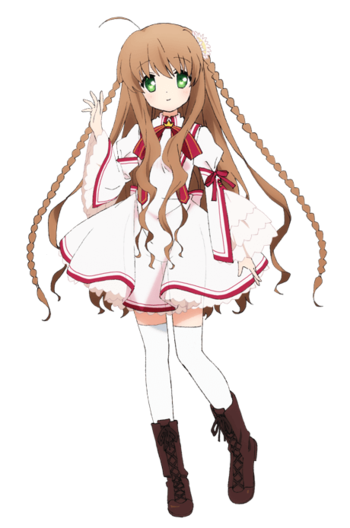 Kotarou's childhood friend, and an expert gardener. She's able to play along with Kotarou's attitude and jokes rather effectively, but is oddly resistant to any insinuations that she and Kotarou are an item and if he jokes too much about it he risks her withdrawing. 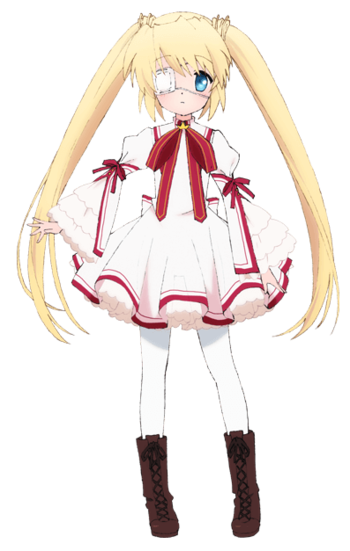 A first-year student and acquaintance of Kotarou. As a self-proclaimed "moral guard", she carries around a whistle to call out students on rules violations. While she is very serious and normally quiet, she also enjoys playing along with Kotarou's pranks. In fact, due to a rather obvious crush, she generally supports Kotarou in whatever he does. She wears an eyepatch, but at the start of the story Kotarou doesn't know why. 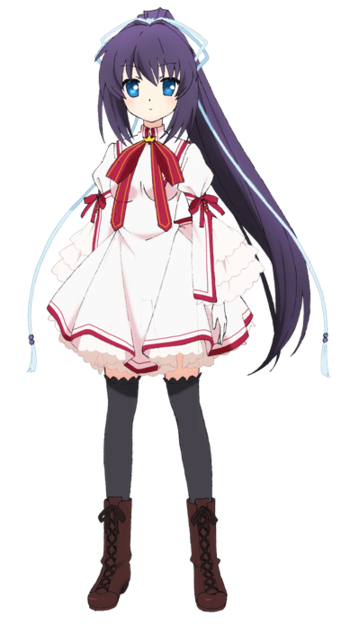 The Class Representative of Kotarou's class. Kotarou seems to think of her as the stock uptight Class Representative character. She's one of the more stereotypically violent tsunderes. In combination with her perceived neat freak attitude such as always wearing gloves she doesn't really have any friends apart from Shizuru. She has a reputation for a high tolerance to spicy foods.

President of the Occult Research Club, and the "mysterious witch" of the school. She's very aloof from the group and only interacts frequently with Kotarou himself and to a lesser extent Chihaya and Sakuya. She's quite fond of teasing Kotarou. Like Chihaya, she doesn't seem to have had any friends prior to the story beginning. Unlike Chihaya, she's still not very good at it during the story.

Koutarou: You've always been relying on someone or something else. Have you ever wanted to get strong yourself?
Chihaya Ohtori

A new student who transfers to Kotarou's school and class early in the story. Prior to transferring she had never really had any friends and can be a little awkward around others. This is not helped by her both being an obvious tsundere and not being terribly intelligent. She also appears to be quite wealthy and has a seemingly perfect personal butler named Sakuya to attend to her. 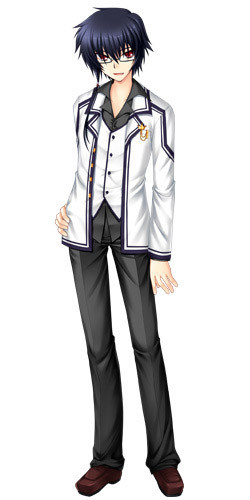 Sakuya is Chihaya's bodyguard and butler. He is amazingly strong, fast, Bishōnen and durable. On top of this, he is excellent at essentially everything. Unfortunately for Kotarou, he seems to have gotten on Sakuya's bad side almost immediately and thus has to endure a constant rain of insulting nicknames.

Sakuya: "Chihaya-san... all cherry blossoms fall apart eventually. It's in their nature.
Kagari 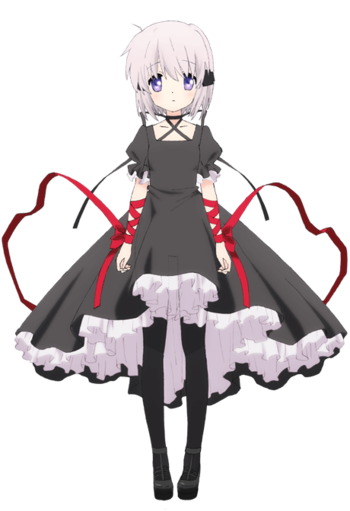 She is the Key that Gaia and Guardian are seeking - a kind of familiar produced by the Earth. 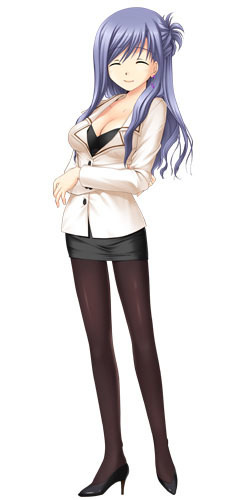 Nishikujou is a rather ditzy looking teacher that commands a lot of respect at Kotarou's school, though she's new to the job. She has close ties to Shizuru and Lucia due to her work with the group Guardian. 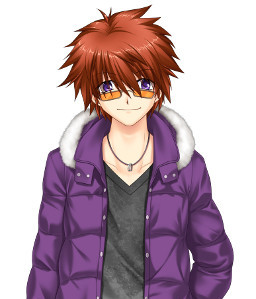 A playboy who dresses young for his age. He is a member of Guardian.

The middle-aged owner of an antiques shop; he frequents Gen-san's ramen stand. He is a retired Guardian operative. 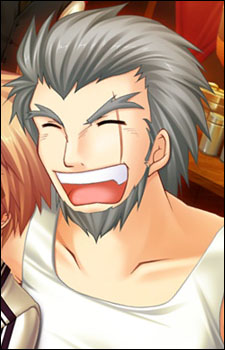 The owner of a ramen shop just off the main park in Kazamatsuri. He is a retired Guardian operative.

A mad scientist who, attempting to create someone who could survive the apocalypse, created Asahi Haruka. 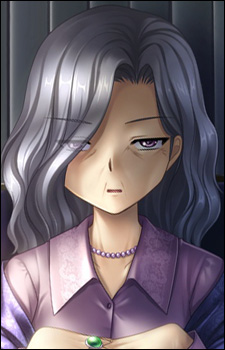 The current leader of the Martel Group. Also the Holy Woman of Gaia, the most powerful member of the organization. She hates humanity with a passion, and is an extremely skilled summoner. She is Akane's adoptive mother.

A member of the Martel group. He is also a member of Gaia, and plays an important part in Akane's route, where it is revealed that he used to serve Sakura Kashima in the same capacity that Kotarou now serves Akane.

A member of the Martel Group. He's a member of Gaia and works with Suzaki's faction and appears in the Akane route.

One of Gaia's oldest and most powerful familiars, the Earth Dragon was created from the corpse of an ancient Tyrannosaurus Rex. Due to its extremely long existence, it has developed sentience and a soul of its own. It views the Summoners of Gaia as its children. 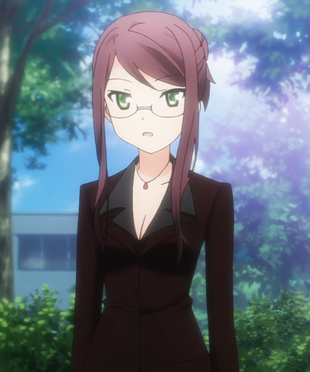 She works for Akane as her secretary, and is also a summoner of Gaia. 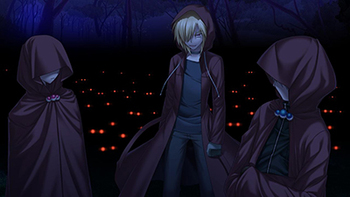 Rogue summoners of Gaia who each control a powerful familiar. 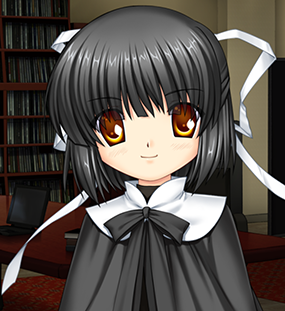 A seven-year old disciple of Gaia who appears in the Akane route. 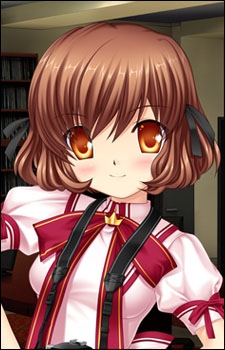 The resident School Newspaper News Hound, who takes an interest in the club's investigations into the occult. 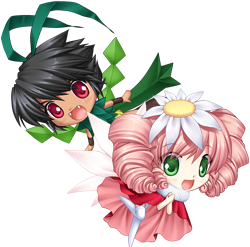 Pani and Gil are two strange creatures that Kotarou finds in the strange alternate Kazamatsuri. He's not sure what they are, but since they seem harmless he lets them stay at his place.

A young girl who appears during Lucia's route. She's slightly insane and believes that the world has never liked her. Around seven years ago, a transfer student who came from the same orphanage as her caused an uproar when he suddenly died the next day, which was attributed to him having met Asahi Haruka. Initially, the investigation into her was to dispel rumors, but eventually it shifts into Kotarou trying to clear her name when he realizes that if the story were true, then Haruka never actually did anything wrong.