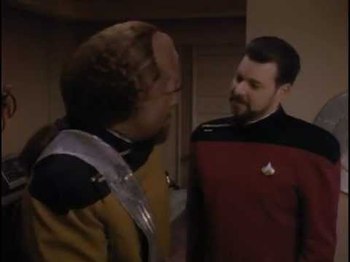 "Besides, you look good in a dress."
Advertisement:

The Enterprise is preparing to initiate the first cultural exchange between the Iyaaran people and the Federation... a situation that Proud Warrior Race Guy Worf doesn't like a bit. He's fussing with his dress uniform, (which he thinks actually looks like a dress), when Riker arrives to urge him along, joke that he looks good in a dress and head out.

The three Iyaaran ambassadors arrive in their shuttle: Loquel, Byleth and Voval. Voval will be taking Picard back to Iyaar, Loquel will be studying diplomacy and human interactions with Troi, and Byleth chooses Worf to be his liaison. This latter shows an extreme chip on his shoulder and is extremely rude, demanding Worf show him to his quarters immediately.

Byleth continues to needle Worf, who fumes privately but restrains himself from disemboweling the man. Riker suggests a friendly poker game to smooth things over, but Byleth blatantly cheats, and Worf calls him out on it. After some fighting words, Worf finally breaks down and starts brawling with the Iyaaran. Worf pummels Byleth until Riker's finally seen enough, but the Iyaaran just stands up, thanks Worf for the fascinating experience, and runs off to write about it, leaving the Starfleet officers confused.

Meanwhile, the Iyaaran shuttle gets disabled in a Negative Space Wedgie, so they land on a nearby planet. Voval is injured, so Picard ventures out into the perpetual lightning storms to search for help. Picard gets struck by an errant bolt, however, and collapses unconscious.

He wakes up in the cargo bay of a derelict ship, being tended by a woman named Anna. She says that Voval has died, and Picard has broken three of his ribs, so she's put a Restraining Bolt on him until he heals. Anna is reticent at first, since she's been alone for seven years, but she quickly warms up to Picard and tries to help him with his escape plan. She insists on keeping him inside the ship and doing all the legwork herself, but she keeps screwing things up. After only about a day, she bluntly tells Picard that she loves him, which obviously creeps the captain out. As time goes on, Picard becomes increasingly suspicious of Anna. He eventually removes the Restraining Bolt, discovering that he's not injured after all. Anna has been keeping him here on purpose, insisting insanely that he return her love. When he confronts her, she runs off.

Picard is trapped in the ship, but Voval suddenly arrives alive, saying that he's been in a regenerative slumber. They leave together to search for Anna. After splitting up, Picard finds her standing at a dangerous precipice, Driven to Suicide because he won't love her. Picard notices a necklace around her neck that had been discarded in the ship. He accuses Voval and Anna of working together and attempts to call her bluff, telling her to kill herself if she desires. But Anna does something he doesn't expect: she shapeshifts back into Voval!

It turns out that the Iyaarans want to experience human emotions after finding the logs of a stranded man and woman who fell in love in the derelict ship. Loquel's and Byleth's tasks were to research pleasure and antagonism, while Voval's task was to experience love itself. Picard is, at first, furious at having been fooled, telling Voval that in his society, what he's done could be considered a crime. Voval doesn't understand the concept of a crime but seems apologetic. Together, they take the not-so-damaged shuttle back to the Enterprise.

Back on the ship, Loquel and Byleth are thanking their hosts for unwittingly helping them understand their respective emotions. The Starfleet officers don't seem too put out by the affair, and the two species depart on good terms.