The character gallery for Makoto Yukimura's Vinland Saga and its anime adaptation.

WARNING: Contains unmarked spoilers for the first major arcs of the manga.

Characters Introduced In the First Arc

As a Teen
As a Child 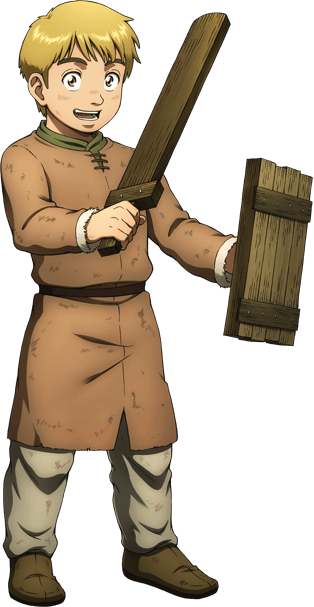 As an Adult (SPOILERS AHEAD) 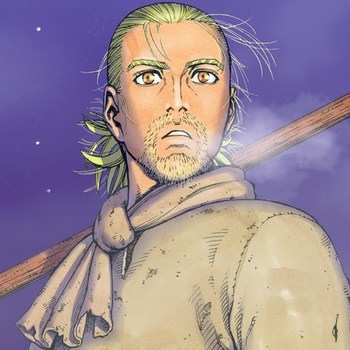 The Hero of the saga, an Icelandic warrior and son of a great general turned freehold farmer. Thorfinn starts the series as a violent, revenge-driven warrior in employ of his own father's killer. The saga follows his growth from his origins into the "true warrior" exemplified by his father. 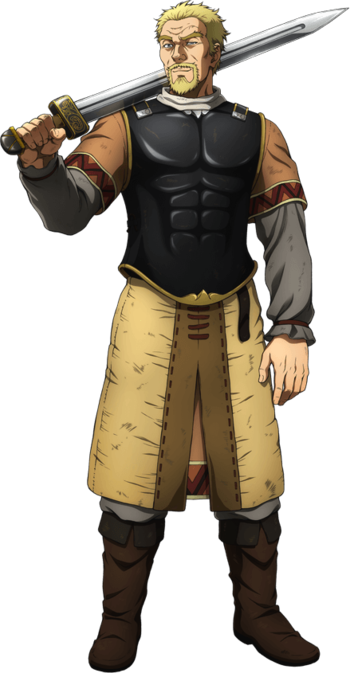 A Danish mercenary commander of mysterious origins, driven to excel through his own unknown motivations. Askeladd serves as antagonist and surrogate father-figure to Thorfinn during the first arc of the saga, pushing around the younger man through having killed his father Thors and using the promise of revenge to make Thorfinn follow him.

The Dragon to Askeladd, being his second-in-command and closest confidante. Known for his usage of mushrooms to drive him into a berserker rage.

Thors "The Troll of Jom", Son of Snorre

Thorfinn's dead father, the mightiest and most favoured captain of the Jomsvikings mercenary band turned anonymous Icelandic farmer and family man. Thors only appears in the saga for less than ten chapters during a flashback, but Thorfinn spends the first two arcs haunted by his death or trying to live up to the ideals Thors attempted to impact on him.

Leif "The Lucky", Son of Erik 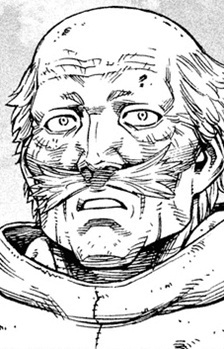 Based on the historical character of the same name. Son of Erik "The Red" (the discoverer of Greenland and founder of the Norse settlements there). At the start of the manga he has already discovered Vinland (Newfoundland) and come back, and spends his time as a farmer and trader between Greenland, Iceland and the mainland. 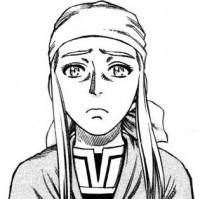 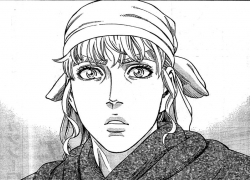 Thors' first child and the older sister of Thorfinn. 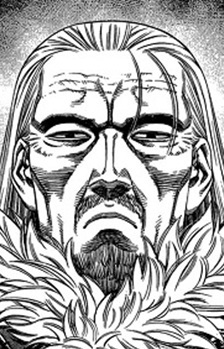 A powerful Icelandic farmer and money-lender, known for his harsh and unyielding nature and harsh treatment of slaves and men under his employ. 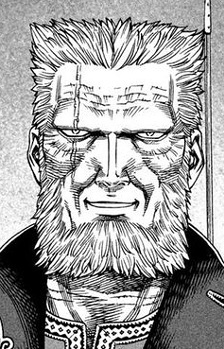 Current captain of the Jomsvikings and recurring minor antagonist of the series. He orchestrates the assassination of Thors and later shows up in the service of the Danish royal family. 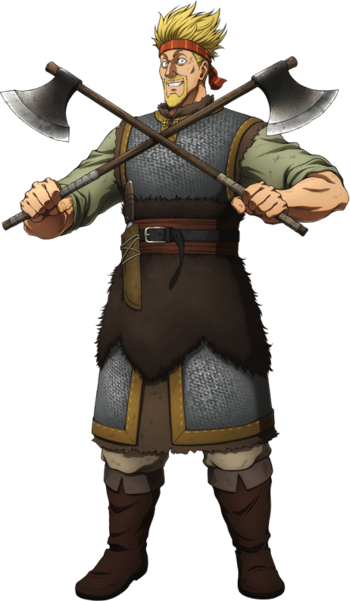 Former captain of the Jomsvikings, Thorkell is an extremely tall and mighty and above all jovial warrior based on the historical/mythological figure of the same name. He has his own band of Blood Knights defined by their tendency to switch to whichever side is losing so they'll have the stronger side to fight against.

Thorkell's second-in-command. Much smarter and calmer than his boss.

Two brothers who are apart of Askeladd's crew.
Canute

Prince Canute, Son of Sweyn, aka King Canute "The Great" 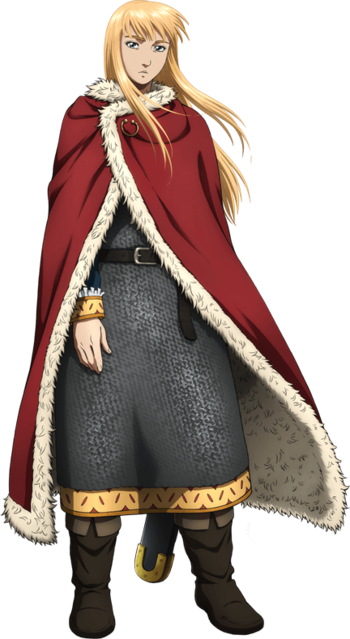 As a Prince
As a king (SPOILERS AHEAD) : 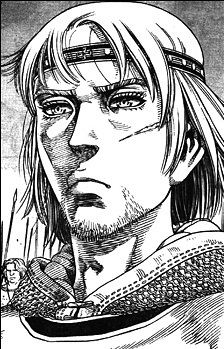 Youngest son of Sweyn Forkbeard, king of Denmark and England. Based on the historical king of the same name, making his character arc somewhat of a Foregone Conclusion to any student of history. Starting the story as a girly-looking Royal Brat, he comes into importance during the latter half of the first arc and is an important background figure and ultimate antagonist of the second arc. 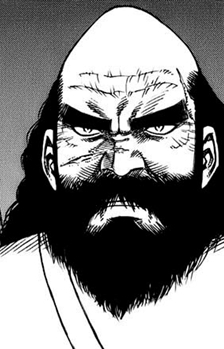 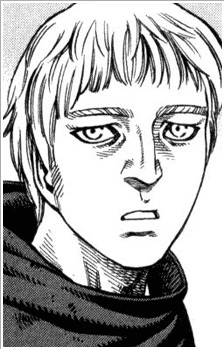 A drunkard English priest who's lost his faith. He considers God evil and is searching through Creation for any signs of true love that might convince him otherwise. 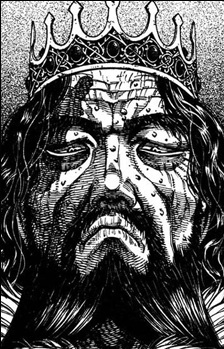 King of Denmark and the Danelaw at the beginning of the series, father of Canute, and later the sovereign of all England.

Characters Introduced In the Second Arc 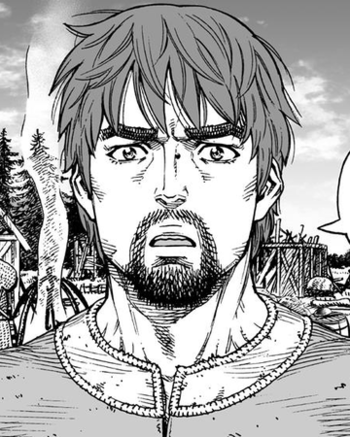 A slave from the Danelaw who is the first character introduced in the second arc. Purchased by Ketil to work on his farm, he encounters Thorfinn and becomes his first true friend and blood-brother. Having only seen the world from the viewpoint of the oppressed, he is extremely focused on social justice.
Ketil 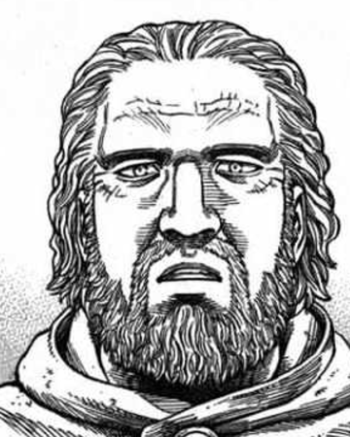 A rich Danish farmer with a rumoured past as a great warrior known as "Iron Fist Ketil". He is the master of Einar and Thorfinn during the second arc.
Sverker 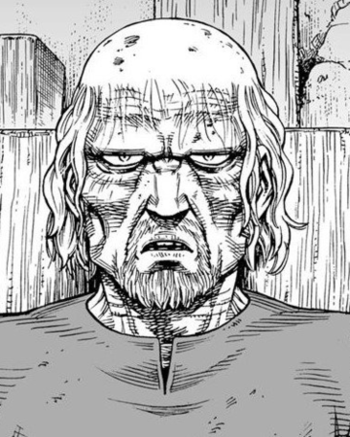 The "old master", Ketil's (now-retired) father and former owner of the Ketil farm who spends his retirement working his own field.
Thorgil 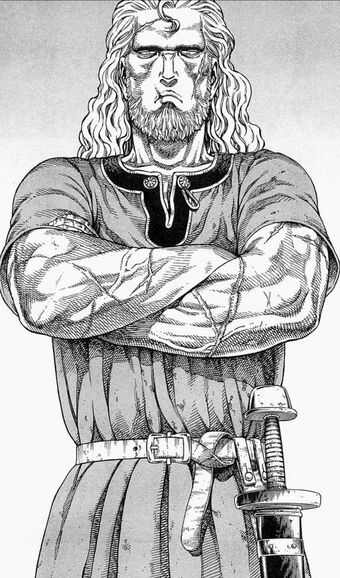 Ketil's older son. A picture of the norse warrior ideal as a man who enjoys fighting and killing. He left the farm to serve in Canute's household and dislikes the rest of his family for their peaceable nature.
Olmar

Ketil's younger son and heir to the farm. Starts out the arc as a bratty rebellious teen with designs of following in his brother's footsteps, who goes through severe Character Development and ultimately proves himself a better man than his father.

A freedman farmer and former slave on Ketil's farm. He serves as Ketil's main assistant and is responsible for Einar and Thorfinn. 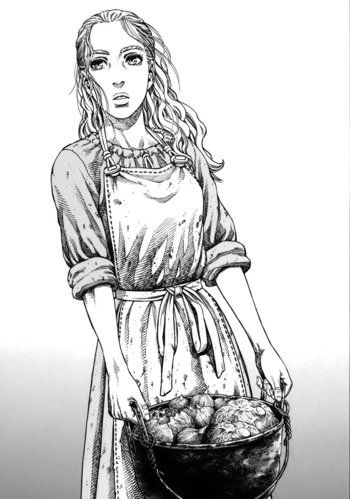 A beautiful Swedish houseslave on Ketil's farm. Einar has a rather transparent crush on her.
Badger and Fox

Two of the 'guests' of Ketil's farms, functioning as guardsmen to their 'host'. 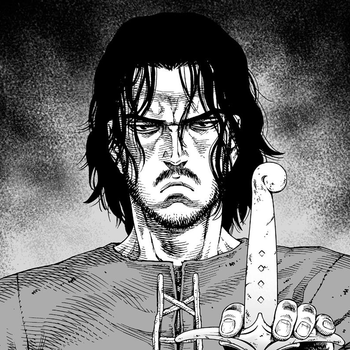 Unofficial 'captain of the guards' of Ketil's farm as the leader of the warrior band who have settled on the grounds. Snake serves as an on-off antagonist and/or ally to Einar and Thorfinn during the farmland arc. He is hinted to have been a former member of the Varangian Guard, given his use of a sabre and his ability to read an Orthodox Bible.

A Swedish slave from a nearby farm who decided to kill his master, his master's whole family, and burn down the house. He is now running into the territory that Thorfinn and Einar work.

A jarl (Norse nobleman) serving as Canute's right-hand man during the farmland saga. 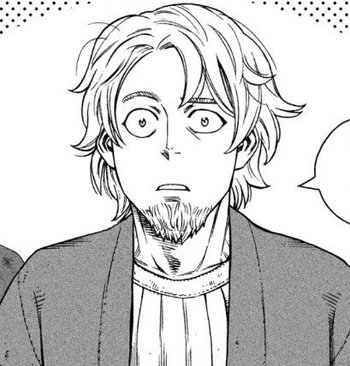 Thorfinn "Bug-Eyes" is the adoptive son of Leif Eriksson, who ransomed him out of slavery while searching for "our" Thorfinn. He accompanies Thorfinn, Leif, and Einar on a trading mission to Greece.

Characters Introduced In the Third Arc

While the arc is built around Thorfinn's merchant voyage, it's divided into mini-arcs with their own titles. 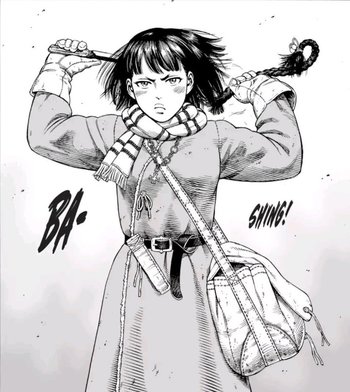 A young, feisty woman who longs to become a sailor and travel the world. She is a widower - Gudrid was once married to Leif's brother and thus she is his sister-in-law. She is set to be re-married to Halfdan's son, Sigurd, but dreads living the life of a "normal woman" where she will be locked in the house for life and will never experience adventure. Through many circumstances, she ends up journeying with Thorfinn and his crew to find and settle in "Vinland", falling in love with Thorfinn along the way.
Sigurd 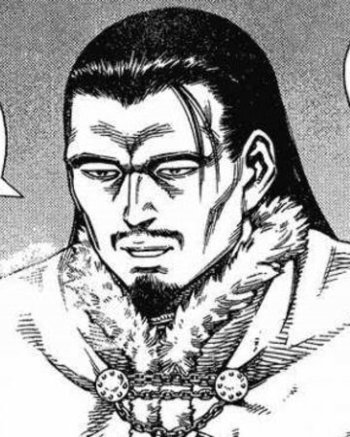 Gudrid's fiancee and Halfdan's son. Because Gudrid stabbed him and ran in their wedding night, he must to chase the crew to Grikland and capture Gudrid to reclaim his honour.
Hallgerd 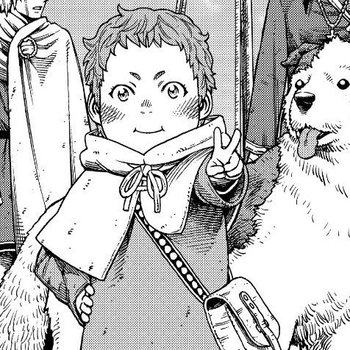 A baby that Thorfinn's crew comes across and adopts on the Shetlands, after they find his own family slaughtered.
Karli's Mama

The Hunter and the Hunted 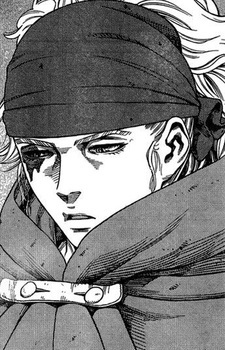 A hunter/trapper Thorfinn and company meet in Norway. She harbours a dark secret.

Floki's ten-year-old grandson, who he's planning to set up as the next chief of the Jomsvikings.

An old captain of the Jomsvikings. Following Sigvaldi's death, Vagn attempted to become chief of the Jomsvikings, which put him in direct conflict with Floki and his own ambitions to put Baldur in that position. The two are currently gearing up for war as a result.

A young warrior who lives to fight anyone who's known to be strong. Floki hires him to kill Thorfinn. Looks and acts like a Japanese Delinquent despite living in 11th century Scandinavia.

Characters Introduced In the Fourth Arc

A slave of Halfdan who wishes to join Thorfinn's expedition to Vinland.