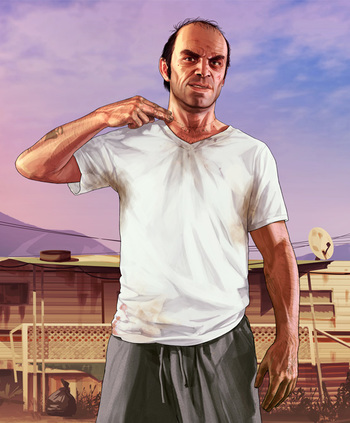 "I'll swing by and sign the contracts, alright? Just ignore the bodies..."
Voiced by: Steven Ogg
"The guns and crank in this area go through Trevor Philips Enterprise, OR THEY AIN'T GOING!"

A Canadian-born former airman, career criminal, and Michael's old best friend and partner in crime, now a mentally unstable drug addict living in a trailer park full of meth heads and biker gangs by the Alamo Sea (based on the real-life Salton Sea) in Blaine County.

When he's not filling the role of the crew's designated pilot, he's their designated sniper, though he doesn't really fit into either the Friendly Sniper or the Cold Sniper mould.