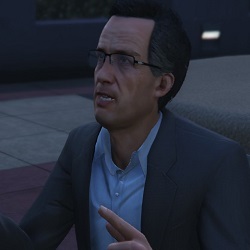 A marijuana-legalization activist who cheerfully hands out homegrown samples. 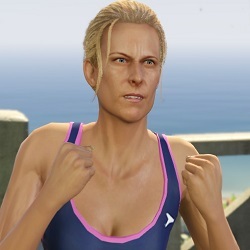 A fitness obsessed woman pushing 40 (39 for the record, and, no she doesn't care she's still single at her age. Quit asking.) who is filled with immense self-loathing, and vents it by challenging guys to races if she so much as thinks that they're looking at her funny. 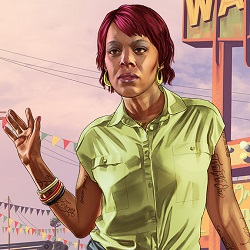 A childhood friend of Franklin's. She and her boyfriend JB are crackheads, although she's the more functional of the two. Due to JB being drugged out of his mind most of the time, she guilt-trips Franklin into covering JB's towing shift multiple times.

A friend of Franklin's who works at the Los Santos Customs near the airport. He challenges Franklin to a number of illegal street races during the night (20:00 to 5:00). 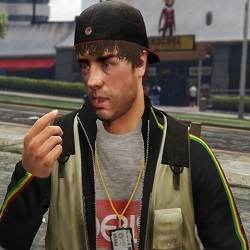 A paparazzo roaming Vinewood that Franklin encounters, he employs Franklin's help in gathering footage that he can sell. He finally ends up with his own Reality TV show, and spurns Franklin of his pay. In the Next-Gen versions of the game, he signs Franklin up for the Los Santos Tourism Board's Wildlife Photography Challenge. 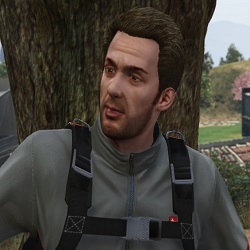 An adrenaline junkie who Franklin encounters across Los Santos and Blaine County. 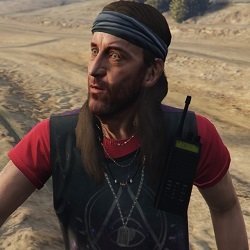 Omega - real name unknown - is a paranoid hippie who claims to have been abducted by aliens. He commissions Franklin to find the 50 alien spaceship parts scattered across Los Santos and Blaine County, so he can rebuild the alien ship. The "ship" is a BF Dune Buggy, modified with neon lights and a strange, futuristic engine. 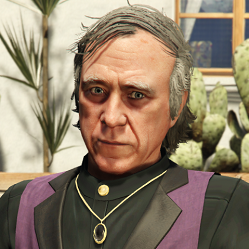 Peter Dreyfuss, an aging movie director living in the Vinewood Hills. He had a penchant for heavy drugs and the macabre during the '70s, belittling the actors and actresses who starred in his movies as "harlequins". This attitude came to a head in 1975, when he murdered starlet Leonora Johnson. Franklin goes to confront him after all 50 scraps of his confession letter are found.

A hunter who appears for Franklin after the player reaches 100% Completion. He asks Franklin to help him hunt down the last Bigfoot. After an extensive chase, he finally corners it down... only to find out that the last "Sasquatch" is nothing but a furry who is deeply in-character.

The second wife and widow of late TV personality Frank Mathers. She commissions Michael to collect the 30 pieces of her late husband's sub, to prove that his death was an accident so that she can collect his life insurance. As it turns out, she sabotaged the airlocks on his sub. Michael can either let her leave or kill her. 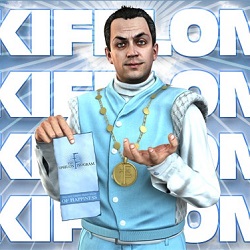 The head of the Epsilon Program

, a religious cult based on equal parts Scientology and Raëlism. 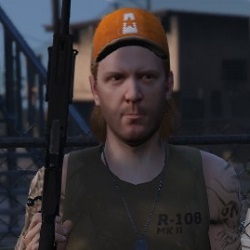 A hillbilly resident of Sandy Shores, who is neighbors with Trevor. He runs a hunting business. 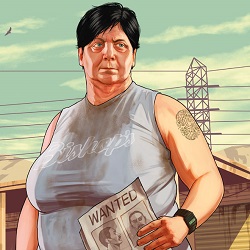 An overweight woman running a bail bond office from her trailer between Sandy Shores and Grapeseed. She commissions Trevor to work as her bounty hunter. 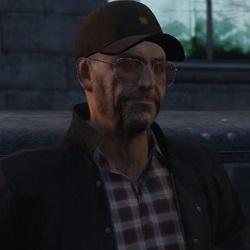 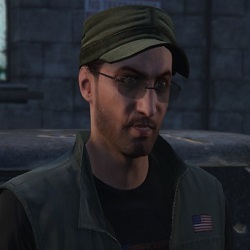 Joe and Josef, an idiot redneck and his deluded Russian comrade, respectively, that run their own two-man "civil border patrol group," getting Trevor to help out several times. While they claim to be protecting America from illegal aliens, it's clear that they're just using it as an excuse to harass foreigners.

Manuel
"My family has been here two hundred years. I'm more American than you. Not that's anything to boast about. "

An old Mexican farmer who has the misfortune of crossing paths with the Minute Men and Trevor.

A Realtor who hires Trevor to boost his business after a run of bad luck - namely, by destroying his rival's advertising and teaching the man himself a very physical lesson.

A pair of elderly British citizens vacationing in Los Santos, hunting for "Vinewood souvenirs" (a.k.a., a bunch of crap once owned by movie stars). They mistake Trevor for stuntman-turned-politician John "Jock" Cranley, and talk him into helping collect their checklist of "souvenirs". 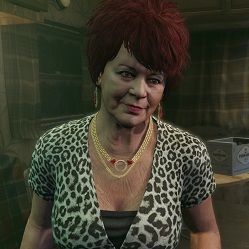 "Is that how you greet your mother, Trevor?"

Trevor's mother, who shows up at his trailer after the game is finished. She asks him to steal a van full of painkillers for her. She is implied to have been a hallucination.