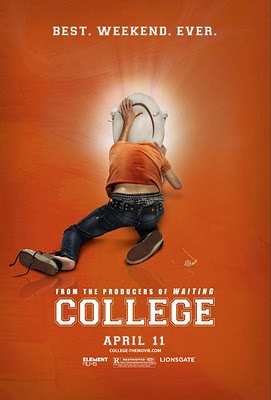 College is a 2008 teen sex comedy directed by Deb Hagan.

Three high school friends named Kevin Brewer (Drake Bell), Carter Scott (Andrew Caldwell) and Morris Hooper (Kevin Covais) decide to go to the freshman orientation weekend at Fieldmont University, which they plan to attend next year. They (or at least Carter) expect the weekend to be a wild riot of parties, alcohol, drugs, women and fun; and while this does to an extent turn out to be true, the weekend also involves being bullied by the fraternity that offers them accommodation. The three friends must submit to the bullying, or else the fraternity will tell the girls on campus that the three are courting that they are actually from high school. This bullying starts to drive a wedge between the friends. Of course, this being a teen comedy, it's inevitable that sooner or later the friends will make up, take revenge on the fraternity and just confess to the girls that they are from high school.

Did not get a wide release, and was not well-received. Rotten Tomatoes scores it 5%, wherein many critics regard it as a low-rent and unfunny Superbad rip-off.