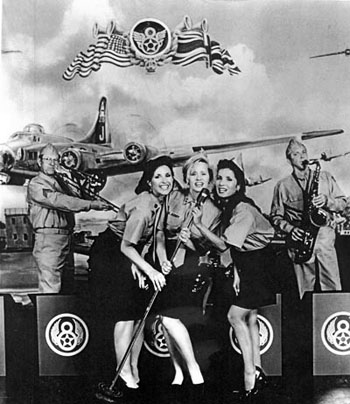 "Don't you think I look cute in this hat?"
Advertisement:

Sometimes occurring in a nightclub, but any large auditorium will do the trick. A sexy female singer, singing a song to a bunch of soldiers/sailors/airmen who are a long way from home and their significant others. Her outfit will be sexy, but classy: shapely and form-fitting, but not particularly revealing or flashy. There is a good chance that it will be a seductive shade of red. If the main male characters of the story aren't in attendance, they will likely be in the middle of battle, with her songs providing the soundtrack as scenes switch between her performance and the battle.

Many Glamorous Wartime Singers sing sentimental songs, reminding the troops of home and the girls they left behind.

If the main character is a dashing young captain, well, he's in for a little wartime romance.