This is a character sheet for the MTV series, Celebrity Deathmatch. Main and reoccurring characters can be found here. 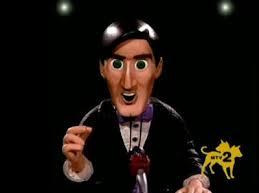 One half of the show's commentary team. The "Straight Man" of the group, Johnny is more professional than his co-host Nick Diamond, and is constantly calling him out for his crazy behavior and zany schemes. Has fought and killed Sam Donaldson along with Nick Diamond. 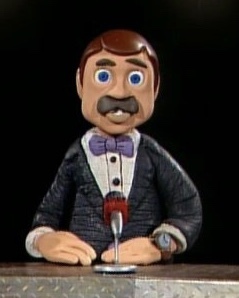 The other commentator. Nick is far more eccentric than Johnny is, and has been shown to be an alcoholic and a divorced father of one. Nick is constantly getting himself into trouble, and has participated in (and won) Deathmatches against Zatar the Alien, The Satyr, and Sam Donaldson (the last one with the aid of Johnny). Has an intense hatred of Debbie Matenopoulos. 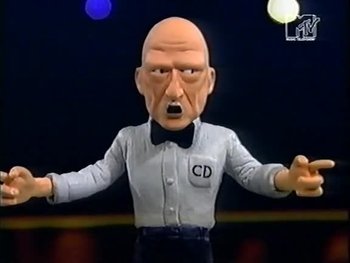 The referee. He is a grumpy old man who has a very laissez-faire attitude toward the rules, and serves mainly to open the fight and declare the winner once somebody is dead. Was voiced by himself during the show's original run, but couldn't return when the show was Un-Canceled due to the fact that he had suffered a stroke. He has fought and killed Judge Judy and Jesse Camp (both times in matches he wasn't supposed to be a part of) in the Deathmatch ring. 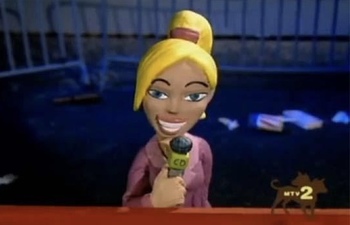 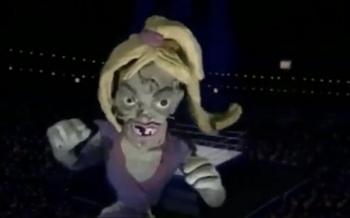 CDM's first interviewer, and without a doubt the most professional of the three. Known for her sunny outlook and for being the only interviewer that both Johnny and Nick liked (it's even implied that she and Johnny once dated). In the second season, she died of spontaneous human combustion after her voice actress left the show. She later re-appeared as a zombie, trying to take her job back from Debbie, only to be messily defeated. 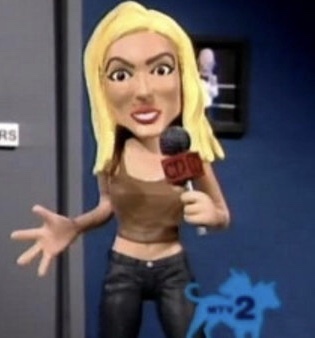 Formerly of The View, Debbie was brought in as the new interviewer after Stacy died. She was far less professional than Stacy was, often acting in a ditzy manner and asking combatants whatever came to her mind. She and Nick Diamond have an extreme dislike of one another while she and Johnny date for a brief period during the show. She defeated the zombie Stacy Cornbred in one episode. Debbie was voiced by herself. 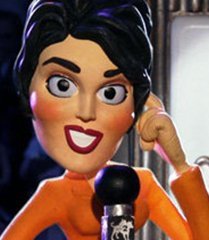 “What are you gonna do, bring back Stacy Cornbred?”

The new interviewer that was brought in when the show was Un-Cancelled. Although more intelligent than Debbie, Tally is every bit as unprofessional, albeit in a different manner. She is extremely self-centered, and likes to insult the celebrities and the hosts. Not surprisingly, she and Johnny Gomez quickly became enemies. 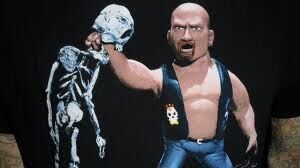 “And that’s the bottom line, ‘cause Stone Cold said so!”

The show's resident science, medical, and weapons expert. Has designed, among other things, Humongous Mecha and genetically-engineered monsters (made using the DNA of dead celebrities) for use on the show. Has defeated Vince McMahon, Tom Cruise and Bruce Willis (the latter two in a match he wasn't part of),. Was voiced by himself. Did not return when the show was Un-Cancelled, which was explained in universe by Nick saying that he was too expensive to bring back.

The undisputed champion of Celebrity Deathmatch. He has fought and killed Charles Manson, Hanson and the Spice Girls (in a match that he wasn't even a part of), Garth Brooks, and Ricky Martin, and has performed his music on the show. He voiced himself in two of the episodes that he appeared in, and has not appeared since the show was Un-Cancelled.

A green, one-eyed alien who has showed up several times to wreak havoc on the show. In his appearances, he has killed Céline Dion (after possessing her), Keith Flint, Mark Hamill and Peter Mayhew, before he was finally killed by a pissed-off Nick Diamond. A later episode showed that he was Not Quite Dead, and he blew up the Deathmatch arena with an Independence Day-style laser blast.

The show's first commentator, who only appeared in the original Cartoon Sushi short and in the "Deathbowl '98" Super Bowl special. Best known for his coverage of the fight between Pamela Anderson and Ru Paul, in which he did nothing but endlessly rewind a clip of Pamela's jiggling breast implants. Was voiced by himself.

Appeared in several episodes of the first season, where he would be killed as a Running Gag, only to return in the next episode. Later on, in season 2, he would partake in a genuine Deathmatch, fighting (and losing to) Donald Trump.

A mysterious man in a mask who, during two Season 5 episodes, would run into the ring and start beating up whoever was winning the fight. It was very heavily implied that he was Michael Jackson.

The most recurring female fighter in the show with a total of three matches. Has fought and killed Ru Paul and Tommy Lee, but lost a match against Heather Locklear.