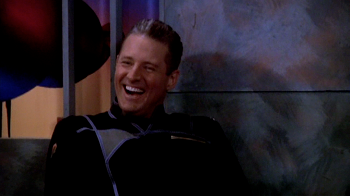 He's finally lost it...
Every time you try to get them do something for their own good, they figure you've got some sort of a hidden agenda.
-Susan Ivanova

Sheridan is in the mess hall when the command staff and Marcus come in and congratulate him on getting the Narn and Centauri to agree to have the White Stars patrol their borders. Sheridan, however, is too busy with an internal conversation and laughing at things only he knows about. The others turn to discussing how much trouble it will be to get the rest of the League worlds to sign on, when Sheridan bangs the table shouting, "That's it!" He comes over and explains that there's an easier way to convince the League to join up.

Sheridan: By not convincing them!

He then orders Marcus to take a flight of White Stars to sector 87 and await instructions. He doesn't know what he's going to do yet, but it's gonna be great! Ivanova goes to check what Sheridan was drinking.

Franklin: If this is the way he is after Delenn's been gone for three days, I don't even want to know what he's gonna be like after another week.

Delenn, in the meantime, is rushing home. On the bridge of her White Star Lennier is getting reports of fighting breaking out in Minbar's capital city. Civil war has started. As Delenn forlornly watches images of Minbar, she laments the things that are happening, wondering if she caused it when she broke the Grey Council. Lennier tries to comfort her by saying it was in fulfillment of prophecy, but she brushes it off. Valen only knew what Sinclair knew. Everything that happens now is uncharted territory. Lennier points out that the natural tendency is to distrust "the others", and that without the Grey Council to hold them together, the castes are beginning to pull apart. He then tells her that a warcruiser, the Takari, is waiting for them...and that he has contacted Neroon.

Back on Babylon 5, Sheridan is explaining what he wants to a confused Londo. After going through the effort of getting him and G'Kar to agree to having the White Stars in their space, Sheridan doesn't want him to discuss it? Flat out deny it if asked? What, is this some human logic? Londo is still somewhat fuzzy on all that. Sheridan doesn't tell him anything, just saying to trust him.

On the Takari Neroon and his entourage have arrived, and are currently engaged in a high-stakes staring contest with the Religious Caste crew. Delenn comes aboard and asks to speak with him alone. He goes with her, since he enjoys a good mystery. As they leave, the crew accost Lennier, demanding to know why the Warrior Caste are on board, but Lennier simply says Delenn will speak for herself.

Once they are alone, Neroon asks why him, since they have been on opposing sides more than once in the recent past. But, says Delenn, he has always been motivated by the best interest of their people, which means she can trust him...after a fashion.

But there is no going back, so they can only move forward. And she would rather work with Neroon than anyone else.

Unfortunately, Neroon thinks it's already too late. This is just the culmination of the schism that's been building since the war with Earth. He feels it can only burn itself out. Delenn has an idea, but she needs his help and, not being one to back down from a challenge, he agrees.

In the Zocalo, the Drazi ambassador finds Sheridan to ask about the White Stars that have been seen in Centauri space, to which Sheridan refuses to comment. The ambassador keeps pressing, but eventually for his trouble only comes away with a Non-Answer that is stretched out and wrapped around his head, before being curtly dismissed.

Sheridan heads to C&C where Ivanova has Marcus on the line. He's in position, but there's nothing there but interstellar dust and an asteroid field. Sheridan orders him to destroy several asteroids then come home. When Marcus asks for clarification, he's shut down and ordered to do it. After the transmission closes, Sheridan asks Ivanova when the Voice of the Resistance will be on next. 8 that evening. He might stop by, but for now he has to talk to Stephen.

The Drazi ambassador has gone to Londo next, who loudly, and irritably, denies having the White Stars on the Centauri borders. Confused, the ambassador leaves and meets with several of the other League ambassadors. He tells them they're hiding something, but before they can discuss anything, Franklin comes up with a request. He wants additional blood supplies, as much as possible...just in case. He doesn't say anything else, before rushing off.

Drazi Ambassador: This is very bad.

Aboard the Takari the members of the Religious Caste are discussing the situation. One of them overheard Delenn telling Neroon "The Religious Caste cannot be allowed to win this war," and they believe she intends to surrender for them. She's the only one the clans will honor, and they cannot move against her, especially the Chosen of Dukhat. They come up with an alternative. They will not move against her directly, they will poison the entire ship and let it drift into hyperspace.

Later, they meet up with a canister of Deadly Gas siphoned from the drive system. Once released into the ventilation system, it will kill everyone. Lennier, however, overhears them.

Ivanova is making final preparations for her broadcast. Since they went on the air, they started getting tips from inside Earth space, such as three-quarter of Clark's cabinet resigning over the Mars bombings. Sheridan has a favor to ask: he wants her to plant a story, nothing big, they don't want to be like ISN after all, just mention that nothing happened Sector 83x9x12. But nothing did happen there, so she'll be telling the truth. He then gets out of the way as the broadcast begins.

Ivanova begins with an overview of the evening's stories, but first one brief announcement: Absolutely nothing happened today in Sector 83x9x12. In the Zocalo, the ambassadors watch then confer together. The Drazi just got reports of several White Stars there firing their weapons. But White Stars don't shoot their weapons at nothing, do they? They must have been fighting someone, or something. They are partially Vorlon technology, so maybe this is an enemy only they can see! They become convinced Sheridan is leaving them exposed to this new threat, but they will not tolerate it!

Neroon is in the Takari's command center where he is joined by another of the Warrior Caste, who suddenly draws his den'bok and attacks Neroon. An alarm goes off throughout the ship, and the Religious Casts think their plot may be discovered. It should be going off soon as they rush to see what's going on. Delenn arrives and has Neroon taken to medical, and his attacker locked in the cells. With a copy of the sacred scrolls to read. She then addresses her caste, explaining that this happened because some of the warriors believe Neroon intends to surrender. If either side surrenders chaos would result, tearing their society apart. Realizing their error, they rush to stop the poison, but it's too late. Fortunately, Lennier is in the Minbari version of a Jeffries tube where he's managed to locate and disable the canister.

Neroon gives Delenn a report on Lennier's condition. It's not good, but Neroon has his personal physician attending to him. He then admits that he has been wrong about her, realizing that Dukhat chose her for a reason above all others, and says that it is right for them to be together at this time.

The League is in chambers where they intend to confront Sheridan with what they know, but the Gaim ambassador urges them to keep quiet, and the Barkiri agrees. They decide to make Sheridan think they know less than they actually do, so he'll underestimate them. Sheridan comes in just then, and asks what they wanted.

There's an awkward silence as they try to come up with a story, eventually going with rumors of raiders and Drakh along their borders. They demand Sheridan help them with their defenses until they can rebuild the forces they lost fighting his war with the Shadows, specifically, the White Star fleet. Sheridan tries to protest that they're busy, but won't say why, so it must not be important. They insist, and grant him all the authorization he needs to operate in their borders. And if he needs them for another mission they will send ships of their own in return.

Drazi Ambassador: You have no choice in this Sheridan! The League has Spoken! You will bring the White Star fleet into the League of Non-Aligned Worlds. In return the League will support any action taken by the fleet.
Sheridan: And I can't possibly talk you out of this?
Brakiri Ambassador: We're afraid not.

Sheridan sighs and says he'll have the treaties drawn up and delivered before the day is out. Satisfied, they dismiss the captain. Sheridan walks to a transport tube, waits for the door to close then..."YES!"

In the med bay, Delenn comes and asks what happened. With a pointed look at the ringleaders, Lennier explains that he found a leak in the fuel system and repaired it before it could cause harm to anyone else. When she asks if it was possibly sabotage from the Warrior Caste, he says they were most definately not involved. Delenn accepts his explanation, and instructs them to see that he is comfortable. After she leaves, the others gather around him to ask why. He says that Delenn lives in a world where people are better than they are, and telling her the truth would shatter her hope in people. He intends to let nothing threaten her view.

Another Voice of the Resistance broadcast begins with Ivanova announcing the League's new authorized patrol force, as well as news from Proxima III, and mentions the fighting on Minbar, requesting any news from that region, while Sheridan watches with mounting concern.

As the Takari approaches Minbar, Lennier sees Neroon leave the ship. In a flyer, Neroon makes contact with the Shai Alyt of the Warrior Caste, Shakiri, with news that his mission was successful and he has access to their plans, which can be countered easily. He also notes that they are divided amongst themselves.

Neroon: It is as you said, Shakiri. The Religious Caste do not have the stomach for a prolonged conflict. Tell our ships to stand by. Victory will be ours within the week.

With that, his flyer activates the jumpgate and vanishes into hyperspace.