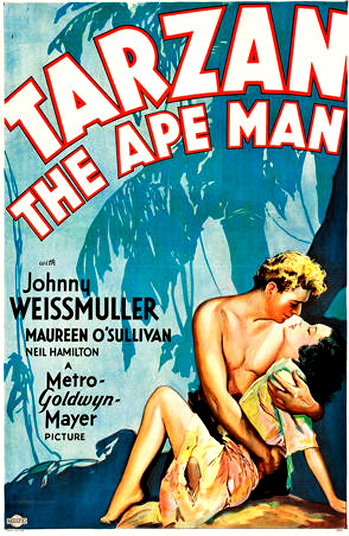 Tarzan the Ape Man is a 1932 adventure film directed by W. S. Van Dyke. It introduced Johnny Weissmuller in the role of Tarzan, based on 1912's Tarzan of the Apes by Edgar Rice Burroughs.

James Parker (C. Aubrey Smith) and Harry Holt (Neil Hamilton) are two explorers who travel to Africa in search for legendary elephant burial grounds and their ivory. Parker's daughter Jane (Maureen O'Sullivan) joins them. While they make their way through the jungle, Jane is kidnapped by the jungle's guardian, the mysterious Tarzan (Weissmuller) and his ape allies.

The film introduced several features that would make Tarzan a pop culture icon, most notably the signature yell

. Eleven sequels starring Johnny Weissmuller and Maureen O'Sullivan would follow until 1948. The first of them, Tarzan and His Mate, came out in 1934.

Not to be confused with the 1981 film of the same name.

Tarzan the Ape Man provides examples of the following tropes: