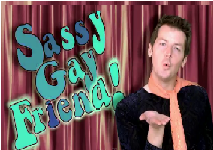 So fabulous, it hurts.
"What are you doing? What, what, WHAT ARE YOU DOING?"

Sassy Gay Friend is a web video series about Brian Gallivan, who is what every single woman needs: a sassy gay friend. This series of skits are written by Gallivan and distributed by YouTube's The Second City Network. They involve a range of women from Shakespeare plays, movies, books and the Bible, who are all saved from their tragic fates by the intervention of a sassy gay friend. Just before disaster strikes, he pops out of nowhere, calls them out on their idiotic behavior, and encourages them to choose a wiser course of action. In later episodes, Brian extends his help to male characters from history, legend and literature.