Fatal Attractions is a documentary series on Animal Planet that first aired in March 2010 and ended in about February 2013. 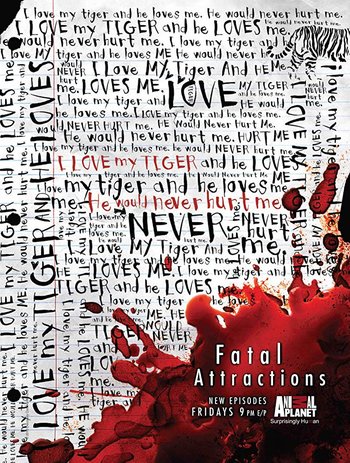 "He would never hurt me."
Advertisement:

The series focuses mainly on people who keep rare and dangerous exotic animals as pets. Each episode focuses on a particular group of animals (IE: Tigers, chimpanzees, snakes, crocodiles) and then proceeds to tell the backstory of a different person's life with the animals. The episodes also feature commentary on friends and family of the people in question as well as insight from experts on animal and human behavior. Often, the stories end in tragedy with either the owner and/or pet being horribly mauled and killed.

Not to be confused with the film Fatal Attraction.