open/close all folders
The Bone Cousins 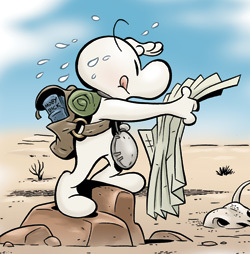 The main protagonist. Fone Bone is the most dependable, resourceful and most moral of the Bone cousins, and tends to be viewed as the "good" Bone since he's never involved in any of Phoney's moneymaking schemes. He's polite and friendly, and pretty good at thinking on his feet in a crisis. He has a huge crush on Thorn, but has problems telling her about it. 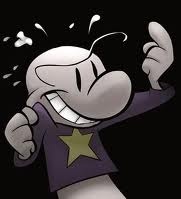 Previously the "richest Bone in Boneville"; Phoney is a greedy, hotheaded schemer who always has a new plan for making money. The problem with his plans is that they tend to backfire and end with him being chased off by an angry mob. 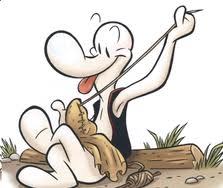 The most happy-go-lucky of the cousins. Smiley is a friendly and loyal guy, but rather short on brains and not the most adept at telling right from wrong, which is why he so often lets himself get involved in Phoney's schemes. He pretty much adopts Bartleby the Rat Creature cub.
Friends and Allies

Thorn was the titular character of the comic's earliest incarnation, and even now can be said to be the real protagonist of the series. She is a young girl on the verge of adulthood, who can talk to animals and who befriends the Bone cousins when they are lost in the valley. 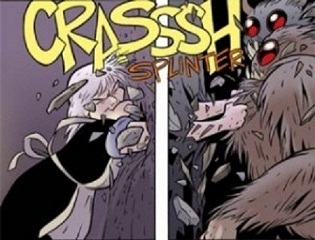 Gran'ma Ben has the strength of ten elephants and can outrun any cow in the valley. She has lived peacefully with her granddaughter Thorn on a small farm for fifteen years, after the "big war".

The owner of the Barrelhaven Tavern, he's a gruff and temperamental but ultimately kind-hearted old man, whom everyone knows has been "sweet on" Gran'ma Ben for decades. He's a constant foil to Phoney Bone and has ruined more than one of Phoney's moneymaking schemes. 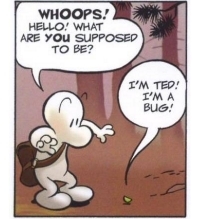 Ted is a tiny little insect with a knack for "gettin' while the gettin's good." Nevertheless, despite his diminutive size he's helpful and surprisingly resourceful, and somehow he always seems to know everything that's going on. 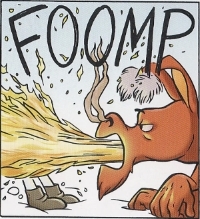 The mysterious protector of Thorn and Fone Bone, and a master of last-minute rescues. He's a laid-back and lazy sort who at first glance doesn't seem very formidable, but he has a number of strange powers and is feared by the Rat Creatures. 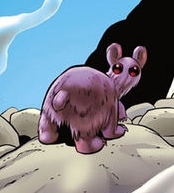 A Rat Creature cub that ran off from the other rats and befriended Fone Bone and Smiley. 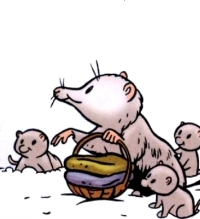 A family of possums — Miz Possum and her three kids — that Fone Bone meets during his first winter in the valley, and who show up sporadically to help him out. 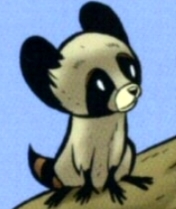 A baby racoon whose parents were eaten by Rat Creatures. Plays a minor part in Bone, but is one of the main characters in Quest for the Spark.

Roderick's friends; a group of young animals in the same situation as him. 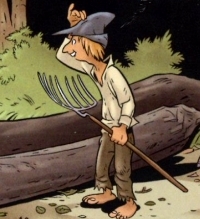 Lucius's assistant at Barrelhaven. He's a young and affable guy, though not terribly bright. 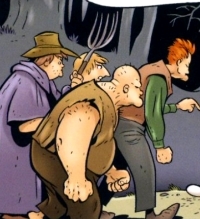 The human inhabitants of Barrelhaven village; usually peaceful enough, but in general rather small-minded, xenophobic, and easily led. The most commonly seen are Wendell the tinsmith and Euclid the farmer.

The Disciples of Venu 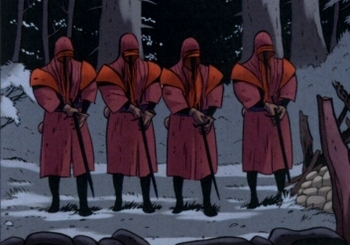 Also known as the "Veni-Yan" or, more insultingly, "stick-eaters," they are a group of hooded monks who have dedicated themselves to the study of the Dreaming. They were once the elite warriors of the kingdom of Atheia, but after the war they have the reputation as wandering beggars. 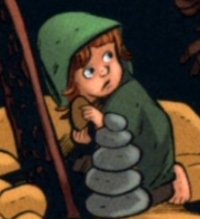 A little girl who lives in Atheia; she's a young priestess and shrine-builder who tries her best to keep the faith of Venu going even after it was outlawed. 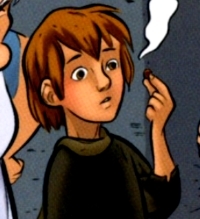 Never actually named in the comic, but he's Taneal's older brother. Smart and resourceful, he knows everyone in Atheia, especially who to bribe in order to get your way. 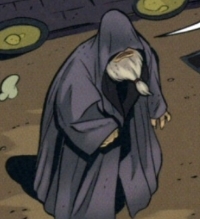 Gran'ma Ben's old teacher; he's an old and somewhat cantankerous old man who runs a small rooftop kitchen and is... not as good a chef as he thinks he is. 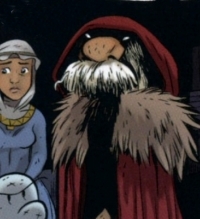 The head of the Diciples of Venu and possibly the oldest human character in the comic.

A seventh-level "dreaming master" and steadfast alley of Gran'ma Ben.

The Lord of the Locusts

A nightmare spirit who long ago wanted to escape from dreams and experience the waking world, which he attempted by possessing Mim, the Dragon Queen. He was defeated and imprisoned by the other dragons, but is still able to contact and influence dreamers in the waking world, plotting to be free once more. 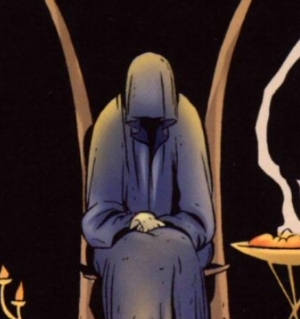 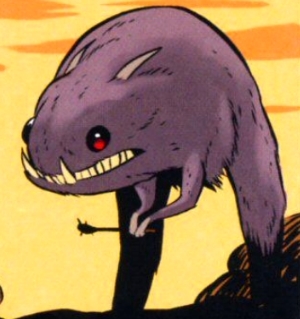 The King of the Rat Creatures; a brutish and vicious monster who nevertheless is basically only a puppet for the Hooded One and the Lord of the Locusts. 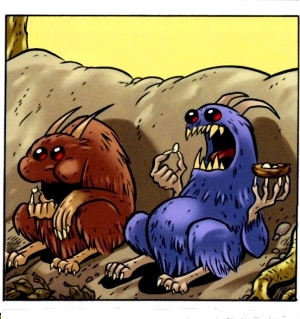 Rat Creatures are the resident monsters of the valley; they're strong and bloodthirsty predators but also incredibly stupid. Encountered in ones or twos they're more comical than scary, but in large numbers they're terrifying. There are thousands of Rat Creatures, but two of them — a duo of foot soldiers — play fairly large roles in the story as Ineffectual Sympathetic Villains who in Quest for the Spark end up having a Heel–Face Turn (as well as getting their own names, "Smelly" and "Stinky.") 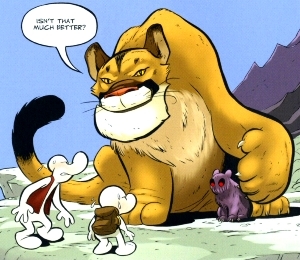 The "Master of the Eastern Border." Roque Ja (and not, as he will constantly remind you, "Rock Jaw") is a gigantic mountain lion who initially sides with the Hooded One and the Rat Creatures because he hates them slightly less than he hates the dragons they oppose.

A former Veni-Yan warrior and ruler of Atheia. He hates dragons with a passion and has outlawed all "worship" of them, including the old religion.

The sect that Tarsil formed; an off-shoot of the Diciples of Venu who follows different teachings and act more like bullies than protectors.
Characters from the past

The Queen of Dragons. Originally she was the one who ensured a balance between the dreaming and the waking world, but she was possessed by the Lord of the Locust and driven mad, forcing the other dragons to turn her to stone.

An evil dragon and a servant of the Lord of the Locusts. 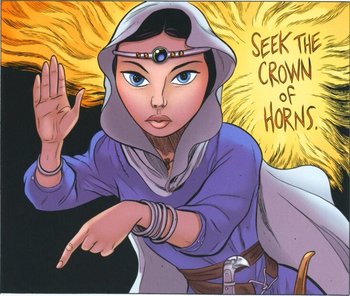 Thorn's deceased mother, daughter of Rose, and the previous Queen of the Valley.

The founder of Boneville and distant ancestor of Fone Bone, Phoney Bone and Smiley Bone. Big Johnson is an adventurer and explorer by nature, and always rushing off to seek adventure.

Big Johnson's pet monkey, who really does not like being dragged off on adventures.

A minuscule dragon and forest guardian, who has some problems with his fire-breathing.

Lily the Bear Cub, Pete the Porcupine, Ramona the Fox, Porter the Turtle and a number of mice are helped out by Big Johnson when their parents are taken by Rat Creatures.

The Queen of the Rat Creatures back in Big Johnson's day.

Queen Maud's son, and the hugest Rat Creature ever to have lived, even larger than Kingdok.
Quest for the Spark

An older cousin of Fone Bone, Phoney Bone and Smiley Bone; he's an inventor and an explorer whose biggest invention, The Queen of the Sky is an airship that runs on potatoes. He's the legal guardian of his lost brother's two kids, Abbey and Barclay.

Percival's niece and nephew, they're twins (Abbey is the older, by two minutes and twenty-three seconds) and usually bicker a lot.

The primary protagonist of Quest for the Spark, Tom Elm is a twelve-year-old boy who lives on a turnip farm but wishes he could become a Veni-Yan warrior. He's best friends with Roderick the Raccoon, who was taken in by his family.

A former Veni-Yan warrior who went into exile after his family was killed.

Lorimar is the last of the First Folk, creatures of the Dreaming who lived in harmony before Mim went mad. She interacts with the waking world by possessing plants and plant life.

A young Pawan girl, and daughter of the Chief of the Nurdak Tribe, who declares that she thinks that the "powers that be are horrible and mean."

A renegade dragon who was loyal to the Lord of the Locust.

The current King of the Rat Creatures and Kingdok's successor.
Others

The star of the Riblet back-up strip written by Tom Snegoski and drawn by Stan Sakai. A young boar which the two Stupid Rat Creatures try to eat, and quickly end up wishing they hadn't.