Warning: To prevent this page from being a sea of white only spoilers from the last four arcs will be whited. 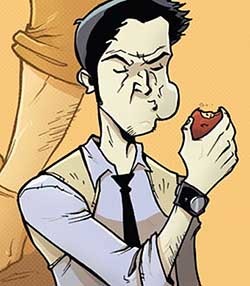 A Philadelphia cop with a special power: cibopathy, the psychic ability to see the past of anything he's eaten. He soon joins the Food and Drug Administration, now a very powerful law enforcement agency, which makes use of his abilities. He mainly focuses on food-related crimes, especially those concerning newly illegal poultry. 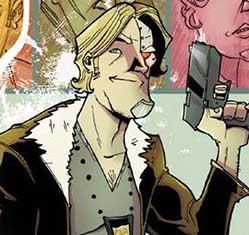 Tony Chu's partner who was badly injured while following a lead gained from Tony's powers. He is rebuilt as a cyborg by the FDA and rejoins his old partner. He opposes poultry prohibition and believes the government is lying about the bird flu but refuses to betray the FDA. 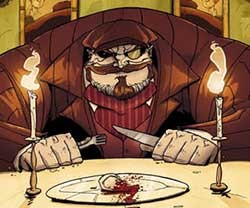 Another cibopath. He is an agent of the FDA who mentors Tony when he first joins. He murders health inspector Evan Pepper and believes that the government is covering up the truth about the bird flu epidemic. It is implied that he lost a significant other in the epidemic, the fallout of which sends him on the run, costs Tony an ear, and turns him and Tony into mortal enemies. While he has the same powers as Tony, he is much fatter and is seen eating food besides beets, getting far more pleasant or tolerable visions from his food.

A deep-cover FDA agent who worked with Mason Savoy and claims he didn't know he'd gone rogue, which is actually a cover for his continued working with Savoy to find out the truth behind the bird flu epidemic. He forms close friendships with Tony and Colby after being reinstated.

An agent with an unnamed power that allows him to tell what something he eats is made of. Temporarily replaces Chew in the FDA, but sticks around.

Head of the FDA branch Tony and the rest of the cast works for. Hates Tony with a passion. Sometimes lover of John Colby.

Chief Director of the FDA.

The number 2 to FDA Chief Director Lamode Currently interim director of the FDA while Applbee's in the hospital following The Collector's battle with the FDA. He retains the position due to Applebee getting the blame for the incident. . Has the apperance of a gingerbread man.

Tropes applying to all of them: 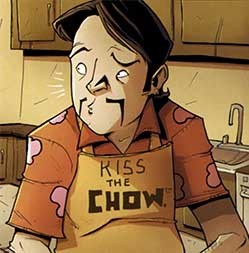 Tony Chu's brother. A professional chef, he is strongly opposed to America's new poultry prohibition law which creates tension between himself and his brother. He lost his cooking show when he accused the government of lying about the bird flu while on camera. He eventually gets a resurgence in popularity following the FDA easing up on the chicken ban. 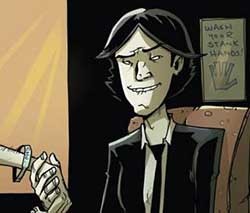 Tony's fraternal twin sister, who works for NASA. She seems to be the only member of the Chu family that doesn't hate him. She's also cibovoyant, meaning she can see the future of any living person or animal she bites. 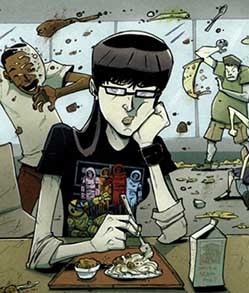 Tony's daughter. She strongly dislikes him.

Tony's older sister who raised Olive for him. As a result she doesn't like him that much. 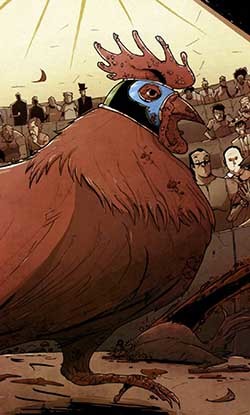 An incredibly badass fighting rooster who is later converted into a Cyborg by the USDA.

The elderly director of the USDA.

The first USDA agent introduced in the series sent to Yamapalu to investigate a series of murders. She ends up teaming up with Tony, and then becomes the first on page victim of the Vampire.
Antagonists 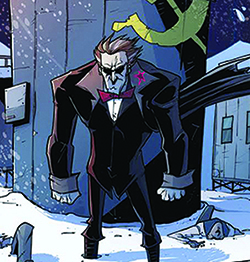 A cibopath who pretends to be a vampire. The Collector is a Serial Killer obsessed with absorbing the food based superpowers of everyone else out of a desire to become "complete".

A businessman who invented "fricken," a chicken substitute using frogs with modified DNA. Savoy finds out that Montero knew about the bird flu epidemic before it happened and later gets the truth out of him after biting him.

A file clerk on Yamapalu who bribed her way off the island and onto a smuggling boat full of Gallisberries. She was the only surivior of the boats and a diet of nothing but Gallisberries. When she took a bit of her last one, the fire writing appeared in the sky, leading her to start an anti-chicken eating cult known as the Brotherhood of the Imaculate Ova, preaching that the letters were a warning against chicken. She's now leading a holy war against them.

A terrorist group that believes the government is covering up the real truth behind the bird flu epedimic. They serve as a recurring antagonist.

Amelia's Psycho Ex-Boyfriend. A sports writer with an obsession with writing a tell all about dead baseball players sex lives, Amelia dumped him due to him never shutting up about the idea. After getting encouragement by his buddies to finally write the book, he decides to kidnap Tony to get the info.

A classmate of Olives with an unknown food power that allows him some form of control over people through cooking. He takes his school hostage, prompting Chu and Colby to intervene.
Other 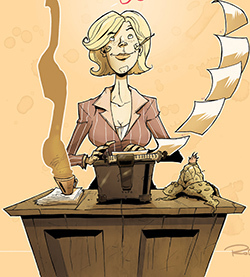 Tony's girlfriend. She is a saboscrivner, meaning that she can write or talk about food so vividly that it can cause people to actually taste it. She uses her ability in her job as a newspaper food critic. Her power allows Tony to taste foods without the often disgusting visions that usually come with them. The two begin dating though Amelia is sometimes annoyed at the time taken up by Tony's job.

A black market chicken dealer who works as an informant for the FDA. He used to deal heroin before chicken prohibition made chicken dealing more profitable.

Director of NASA with a crush on Toni.

Tony's boss during his brief time as a traffic cop.

Tony's ex-girlfriend. It is implied they broke up due to her blatant insanity. Later, it is revealed they were actually married, and her "insanity" was caused by brain cancer. When Tony proposed to her, she accepted and asked him to eat one of her toes.