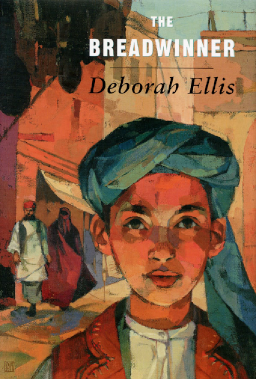 The Breadwinner is a children's novel by Deborah Ellis. The title refers to the role of the protagonist, 11-year-old Parvana, who is forced by circumstances to be the breadwinner for her family in a war-torn Taliban era in Afghanistan.

An animated film adaptation was released in 2017, co-produced by Cartoon Saloon (The Secret of Kells, Song of the Sea), Aircraft Pictures Canada and Angelina Jolie.

Has nothing to do with that weird cartoon with the ducks.

Unintentional Final Message:A Taliban fighter asks Parvana to read a letter from his wife, which happens to be one of these.