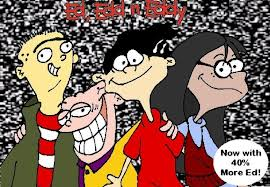 is a non-supernatural spin-off of "The Grim ED-ventures of Ed, Edd, n Eddy" that answers the question "What if Edna existed in the "Ed, Edd n Eddy" canon as Nazz's Cousin?" Stuff will happen!

The friendship of the three male Eds and Edna all started when Eddy tried to buy a dirty movie off eBay by using the money he earned from his "devil fruit scam". Nazz's cousin Edna moves to the cul-de-sac and wanted friends, sure enough meeting the Eds made her day. However during an incident involving the Kankers, she noticed that one of them was treated by the other two. It took Edna alot of quick thinking but she manages to befriend May Kanker and win the trust of her male Eds.

However with most of the summer spent on being pals, making a new friend in Rachel Carlyle, and avoiding the other Kanker Sisters, there was the arrival of a new girl gang from Lemon Brook named "The Killer Sisters" and they are totally obsessed with destroying the Kankers and ruling their turf... plus Rachel has a history with them. So it took the combined efforts of the 4 Eds, the kids, and the kankers (and a rickroll) to get rid of them... but they swear revenge.

Note that many of the character tropes that described the cast in the original Ed, Edd n Eddy series are still applicable.

Tropes that appear in the series: