Comic Book / A Christmas for Shacktown 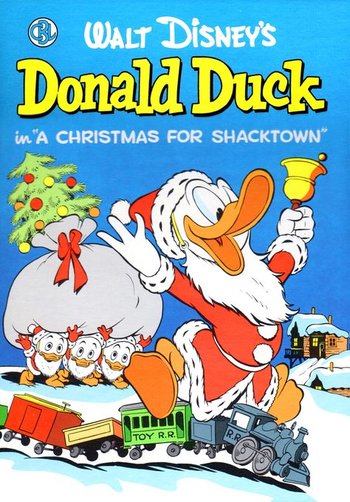 A Christmas for Shacktown is a classic Donald Duck and Scrooge McDuck comic story written and drawn by Carl Barks, originally published by Dell Comics in Donald Duck Four Color #367 circa 1952.

The story starts with Huey, Dewey and Louie passing through Shacktown, the most impoverished part of Duckburg. They progressively get more downbeat as they see how truly deplorable it is to live in, with children of their same age dressed in rags and clearly ill and underfed. Feeling responsible for them, the trio come up with the idea of organizing a Christmas celebration.

By chance, they come across Daisy Duck, who happens to be the president of a local ladies' society and quickly agrees to help them out once the trio explains just how dire Shacktown's situation is. But it quickly becomes clear that raising sufficient funds is harder than it sounds. With all their efforts, they are still fifty dollars short—$25 for turkeys, and another #25 for a toy train for the kids. Daisy and the nephews quickly turn to the aid of a reluctant Donald Duck, asking him to see if he can get Scrooge McDuck to cover the remaining cash.

Naturally, Scrooge, who is busy shoveling his three cubic acres worth of dollars back into his money bin, immediately refuses his nephew's request for a full donation—instead, the grouchy miser challenges Donald to raise $25 himself before he'll even consider handing him the other half of the money, promptly chucking hin out of his office.

Donald soon learns that asking for charity during the holidays, when every family struggles with its own increased expenses, is very difficult. He then tries to trick Scrooge into making the donation by disguising himself as old Jake McDuck, Scrooge's own uncle—while the disguise technically works, the ruse quickly backfires when Scrooge demands 'Jake' pay back a shilling he loaned him sixty years ago, which has now escalted to a whopping $8,336 thanks to interest and inflation. Donald then successfully tricks Scrooge into forking up $5 by planting a rat near his money bin (which Scrooge fears will chew up his money) and offering to 'exterminate' it for him, but this also backfires when he puts the money in the same pocket as his rat, which chews it up. While the nephews and Daisy have managed to scrounge together ten more dollars, they're still $15 bucks short. Donald then tries to pose as a hobo begging for money, but this backfires when Scrooge sees him having some success at it and wanting to try the same idea, though Donald at least walks away with a silver dollar.

As more time passes and the kids in Shacktown wait in anticipation for their new toy train, Donald is still $4 short. He comes across his lucky cousin Gladstone Gander, and swallows his pride to ask him for help. After explaining Shacktown's situation, Gladstone agrees to help, exploiting his luck to get a hot dime thrown into his hat from a nearby hotel, which then reveals a wallet in the snow, with enough cash inside to get Scrooge to honor his end of the bargain. Donald thanks Gladstone, but also requests the hot dime, which Donald then gives to Scrooge (who is still posing as a beggar) just to spite him.

Flustered that his act only netted him a dime, Scrooge returns to his money bin, but the moment he puts the dime on top, the bins floor finally gives out from the sheer weight, falling deep into a dark cavern. As if Scrooge's luck wasnt bad enough, Donald and Daisy arrive and Donald then demands Scrooge to fork over the other $25. The deeply upset Scrooge then breaks the news about what happened—Donald opens the vault door and discovers that inside, the overloaded floor had collapsed, and the money has been lost in the caverns below Duckburg, leaving Scrooge penniless and depressed and Donald still $25 short of the needed money. A distraught Scrooge immediately tries to pin the blame on Donald, but Donald is more concerned about a visibly weeping Daisy, who thinks this turn of events means the Christmas party wont be happening. Donald refuses to give up, believing the money is still down there and waiting to be hoisted up.

Scrooge wastes absolutely no time working on a solution; he hires the worlds best engineers to find a way to get the money out of the cavern. Unfortunately, the engineers all come to the conclusion that its a lost cause, pointing out that besides just how deep the chasm is, theres another thin crust of earth directly underneath where the money now is, warning that the slightest jiggle could cause the crust to break and then swallow it all up in a bottomless pit of quicksand. Scrooge proposes the idea of tunneling to it, but that also gets ruled out due to the risk of tunneling machinery causing the crust to break.

While Scrooge bawls his eyes out over his lost money, Daisy decides to cut their losses and just settle for a party with turkey dinner for the Shacktown kids, ruling out the toy train.Dewey, Huey and Louie refuse to give up, and spend all night musing up an idea. The very next morning, the now destitute Scrooge is forced to move in with Donald, but the nephews reveal an idea they have over breakfast; they remember that they once explored the Shacktown district and learned about a cavern that might lead to the lost money. Ecstatic, Scrooge leaps at the idea. The nephews lead them to the cavern, and Donald and Scrooge explore it. They finally find a badger hole adjacent to the cavern with the money, but it can't be expanded as the vibration would collapse the bottom of the cavern, making it seemingly impossible to retrieve the money. Scrooge throws in the towel and recommends Donald leave him, believing this is as close as he'll ever get to his beloved money again and thus deciding to stay permanently. But the nephews quickly arrive with a last-minute solution to their problems—their fellow Junior Woodchucks managed to find an old toy train with tracks, which just happens to be small enough to fit through the hole. The slow and light toy avoids the problem of breaking the tender crust, and manages to gradually ferry out some of the money. An elated Scrooge immediately says the nephews have earned his everlasting gratitude, but at Donald's insistence, he also gladly allows them to keep the first carload of money that comes out of the hole. Cue the train leaving the hole with a pile of money worth $100,000. Scrooge immediately faints upon hearing this.

Using their newfound fortune, the residents of Shacktown receive a grand Christmas party, with colored Christmas trees, cakes, candies, turkeys and dozens of toy trains. But as this celebration goes on, Donald goes to check on Scrooge, who is still residing inside the cavern, bemoaning how he'll have to wait "two hundred and seventy-two years, eleven months, three weeks and four days!" to get the rest of his money bin out of there.