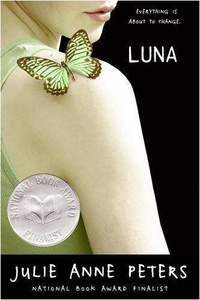 "Yeah, I loved her. I couldn't help it. She was my brother."
Advertisement:

by Julie Anne Peters is a young adult novel about a transgender teenage girl's transition experience. Despite being about the titular Luna O'Neill, born Liam, it is told from the first-person perspective of her younger sister Regan, who at the start of the story acts as Luna's Secret-Keeper and the only person who understands her and sees the girl in her.

The situation is complicated by their conservative father, a "manly man" who tries to raise his "son" in these values as well, and Alyson, Luna's friend with Incompatible Orientation, who has a crush on Liam as a boy without knowing that such a person doesn't really exist. Meanwhile, on her front, Regan starts falling for a New Transfer Student called Chris, but a series of misunderstandings and Regan's schedule overlaps with helping Luna conspire to keep them apart...