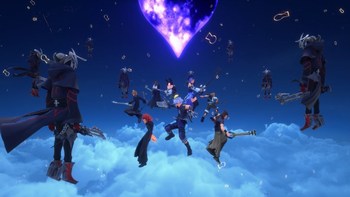 Back-to-Back Badasses plus High-Altitude Battle equals one awesome scene!
With all the wait and excitement that Kingdom Hearts III has built up these years, then it's only obvious that it has all brought in some truly awesome moments!

WARNING: Spoilers Off applies to Moment of Awesome pages. All spoilers will be unmarked!