Literature / The Magic For Idiots 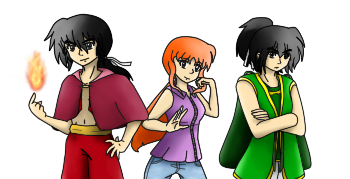 Rokuro: "Well, Akemi had to get her looks from somewhere... *beat* I- I-! Uh-! Th-That’s not-! I meant her hair color, okay!? The weird hair color! Ack! I didn't mean weird! I just meant strange for a natural color-! I- That came out wrong! I meant-! Well... You know! I-! Uh- I mean-!"
Maruchi: "You're going to hit subterranean levels if you keep digging yourself into a hole like that."
— A prime example of Rokuro's blundering personality and Maruchi's snarky one.
Advertisement:

Mabaka! Magic is for Idiots! is a Web Serial Novel written by veteran Fan Fiction writer, Half Demon Cali, and is her first and major original work. It was first published on September 15th, 2009 on deviantART, and then on Fiction Press two months later, on November 8th. As of chapter 8-2, updates are only posted on Fiction Press. (The Magic for Idiots was the beta title.)

Akemi Segawa is a first year student at Okashii High School, who lives at an old shrine with her father. Her best friend Rie is an occult enthusiast, her Aunt Meiko is a 40-year-old preteen, and her boyfriend Daisuke is about the only normal character in the entire series so far. If it weren't for them, however, her life would be extremely and utterly dull, since she only thing she really does in her spare time is her chores. So basically, a typical female human Tsundere protagonist.

Then a wizard from another dimension crash lands in her yard and everything goes to hell.

Rokuro is a Type 1 magic student from the second dimensional plane, Mahokkai. Contrary to what Akemi read about wizards being wise and in touch with nature, Rokuro is awkward, lazy, can't think things through to save his life, and can't perform the smallest of spells without something nearby exploding on him. If you're wondering how the hell he ended up in the human world, then read on.

Between space and time, there's a dimensional transport system called the Hakobuttori. It's commonly used by beings who don't have the ability to traverse between worlds at their will. Rokuro accidentally got himself caught in it, and since he doesn't have enough magic to get himself back home, he's now stuck living with Akemi and her father, Shigeru. For a year. While they try to keep him a secret.

As the chapters progress on, a fairly large and colorful cast is assembled, and each with their own unique quirks to add to the fun. Character development really starts once all the introductions are done, and the amounts of Ship Tease between Akemi and Rokuro are taken to insane amounts for two people who are supposed to have platonic relationship.

There are currently forty chapters published online (1-1 to 16-1). Start here, if you wish

. Just be warned that Cali is in the midst of rewriting her earlier chapters and that there will be slight inconsistencies. And word puns. Lots and lots of word puns. With cultural notes at the bottom of each chapter to explain.

A chapter guide is in production here.