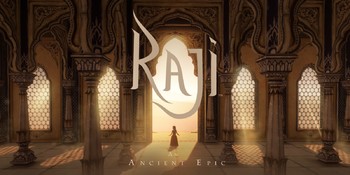 Raji: An Ancient Epic is an Indie game developed by Nodding Heads Games and released as a timed console exclusive on Nintendo Switch on August 18, 2020 with a forthcoming release on Steam and other console platforms.
Advertisement:

During the next Great War, the demons that had been previously defeated by the gods are now looking to avenge their defeat at their hands. During the long time of peace, the humans of the earth became content yet unprepared to face the reality of an invasion by both groups. After the fall of every major city and major forth, the people of the earth send Raji to defend their race. Gifted by the gods with magical powers, she must not only save the earth but also her kidnapped brother.