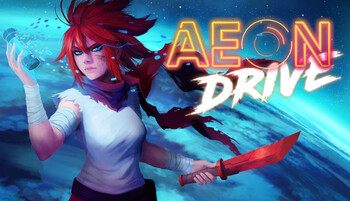 Aeon Drive is an action platformer with a speedrunning twist!
Jackelyne, a young space ranger from another dimension, crash-lands her spaceship into the middle of a bustling metropolis, Neo Barcelona. With her power sword, teleportation dagger, unique skill to control time, Jackelyne has to find all the Drive Cores to fix her ship - and save the city from impending doom.
Advertisement:

Aeon Drive is an action-platformer game developed by 2Awesome Studio and published by CRTICIAL REFLEX and released on June 25, 2020 for Steam, PlayStation 4, Xbox Series X, and Nintendo Switch.

In the game, Jackelyne can use her sword to attack enemies as well as making use of a teleportation dagger to move around the level and the ability to freeze time. She has only about 30 seconds to get to the end of each level. She can use her time-bending skills to have an easier trip through levels since some exploration is needed to help her find her spaceship parts.