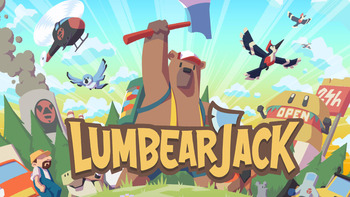 This bear has an axe to grind.
LumbearJack is an upcoming indie puzzle adventure game from Armor Jack Studios releasing in early 2022 for Nintendo Switch.
Advertisement:

The game stars Jack, a human-like bear with a disdain for human presence and invasion into his forest. When he finds that the evil corporation Evil Works is coming in and wants to log and bulldoze his forest to build a new city, Jack gets the help of several friends, and his trusty chainsaw to save his forest and drive the humans out.