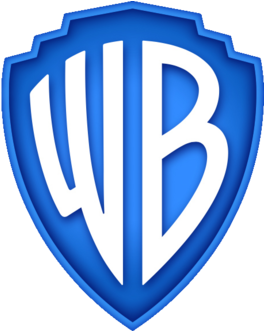 Making fundamental things apply as time goes by since 1923.
Warner Bros. (pronounced "Warner Brothers", and frequently abbreviated as "WB") is one of the world's largest and best-known producers of film, television, and video game entertainment. It is owned by AT&T, which also owns cable networks like CNN, Cartoon Network/[adult swim] and HBO among others. At one point Warner Bros. was even larger than that in the past, with operations in books, magazines, cable systems and music (see below) as well as ownership of America Online, although that would be another entire page.

If anyone is going to ask, the "Time" in former unit name TimeWarner came from Time Inc. which produces the eponymous Time and other magazines, though it has been separately owned since 2014. Warner Music Group is also entirely separate and has not been connected to TimeWarner since 2004; it has, since July of 2011, been in the hands of Access Industries (although WB owns its own label — WaterTower Music, previously New Line Records). Warner (Bros.) Records, which has its own article, used the WB name and shield logo under free license from TimeWarner until 2019, when the license expired and the company rebranded as Warner Records. Warner Books was also sold off in 2004, and is currently known as Grand Central Publishing after the Time Warner Book Group was sold to Hachette Book Group in 2006. Time Warner Cable was spun off in 2009 and rebranded as Spectrum under Charter Communications in 2016. TimeWarner also embarked on a $165 billion merger with AOL (the most expensive media merger of all time) in 2001, which didn't turn out so well after the dot-com bubble burst and dial-up began to fall out of favor (Time Warner chief Jeff Bewkes described it as "the biggest mistake in corporate history" and "misguided in the first place"); AOL was sold in 2009 and is currently in the hands of Verizon.

Telecommunications conglomerate AT&T announced plans to acquire TimeWarner for $108 billion in 2016, a deal which was met with intense scrutiny from the United States Department of Justice, who argued that it would make the industry anti-competitive. Due to a lawsuit from the federal government, the merger was delayed significantly until a verdict could be reached. AT&T and TimeWarner ultimately prevailed in the legal battle. The decision in the landmark case ultimately paved the way for other pending mergers, showing how Hollywood's landscape would be drastically altered by the rise of streaming services. The merger was complete in 2018, and not long after that, TimeWarner rebranded as WarnerMedia, causing the original name to be retired once and for all.

They also own the pre-1986 Metro-Goldwyn-Mayer library as well as distribution rights to the RKO Pictures library in North America and Australia (aside from It's a Wonderful Life, which is with Paramount via Republic Pictures). This was due to a defunct subsidiary known as Turner Entertainment, which also held the pre-1950 WB catalog.

As a whole, most Warner Bros. content fuels HBO Max, a large-scale streaming service that launched in May 2020 and an expansion of HBO's other services.

Specific film divisions and film-libraries owned by Warner Bros. include:

Anime on which Warner Bros. Entertainment Japan is a member of the production committee (generally with Showgate):