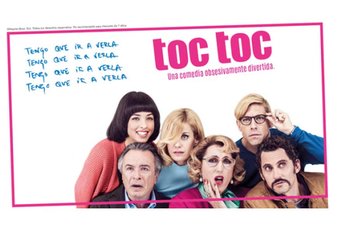 Toc Toc is a Spanish 2017 movie from Warner Bros. based on a play of the same name by Laurent Baffie.

People all over the world have some form of obsessive compulsive disorder. This is especially true for six people living in Madrid, Spain (where they call it "trastorno obsesivo compulsivo" or TOC). They are:

Fortunately, they know about a world-famous doctor known only as Dr. Palomero, whose expertise is in helping those riddled with OCD. Unfortunately, because the receptionist, Tiffany (Inma Cuevas), had technical frustrations with a new scheduling system, all six have been scheduled to see Dr. Palomero at the exact same time. To make matters worse, it turns out the good doctor's flight from London is running late. Despite this and a less than pleasant first impression, Federico suggests they all share their problems with each other to pass the time. Besides, what could happen?