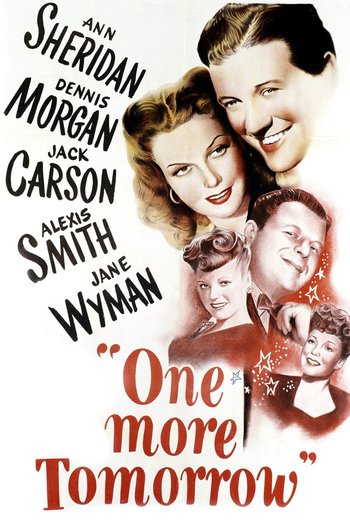 One More Tomorrow is a 1946 American film directed by Peter Godfrey for Warner Bros.. It is a remake of the 1932 film The Animal Kingdom.

Wealthy socialite Tom Collier (Dennis Morgan) is bored by his father's aspirations for him and by his elitist crowd. His life changes when he meets commercial photographer Christie Sage (Ann Sheridan), even making his way to work with Christie and be near her, but Christie eventually refuses Tom's proposal of marriage and leaves for Mexico to pursue her photography as a fine artist. During her absence, the rebounding Tom marries gold-digging and manipulative Cecelia Henry (Alexis Smith), who plans to mold him to her own wishes. Christie returns from Mexico, realizing that she has made a mistake and that she loves Tom, but it's too late. Cecelia schemes to separate Tom from Christie, from his magazine work, and ultimately from his principles. Tom must decide whether to publish an exposé on corrupt defense contractors which will compromise many of his father's rich friends.