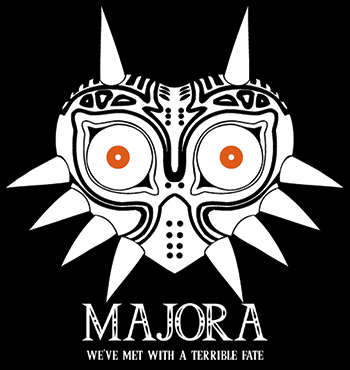 "Someone actually opened a page for Majora on TV Tropes!"
"I was like "WHY?? It doesn't even exist as a concrete product yet!"
— Miguel Bulteau on finding out his works has a TV Tropes page.
Advertisement:

Majora is a fan-made operatic adaptation of The Legend of Zelda: Majora's Mask written and composed by Miguel Bulteau. Although currently in the early stages of development, the project has gained a large following since it surfaced on the internet in early 2012. The opera follows a Three-Act Structure, where each act corresponds to one of the three days in the original game.

The story of the opera is different from Majora's Mask, as Link is not present. Instead, the story centers on Kafei and Anju as Kafei searches for his missing Sun Mask before their wedding in three days, even as everything in the world is working against him. As this happens, the Happy Mask Salesman is also searching for another mask, one that must also be found within three days, but for an entirely different reason.

As the moon gets closer and without a hero to save the day, it becomes increasingly apparent that the world may not exist after three days. But this does not stop Kafei from his quest to fulfill the promise he made to Anju.

More information on the project can be found by going to http://www.mbulteau.com

and clicking the mask.

There are currently several demos and instrumental samples, which can be seen on the creator's YouTube page.

The project's blog can be found at http://majoraopera.wordpress.com/