The Champions in general
Advertisement:
Arizona 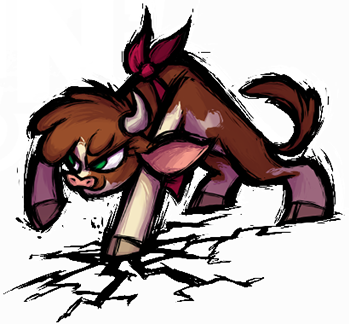 Voiced by: Tara Strong
"Mess with the cow - you get the horns!"

Youngest daughter of her nomadic clan's leaders, Arizona's small size belies her strength, courage, and determination. The only member of cattlekind brave enough to step up as a candidate for the position of Fœnum's Champion, she steadfastly charges towards her goal, despite her lack of experience with the world outside The Prairie where she was born and raised.

In Story Mode: Chapter 1, she is the playable protagonist.

Arizona is a brawler who prefers close-range attacks. Her magic meter starts empty and can contain up to 3 bars. One bar is added whenever Arizona successfully catches her opponent in her lasso, and it can be spent on enhanced versions of her special attacks. 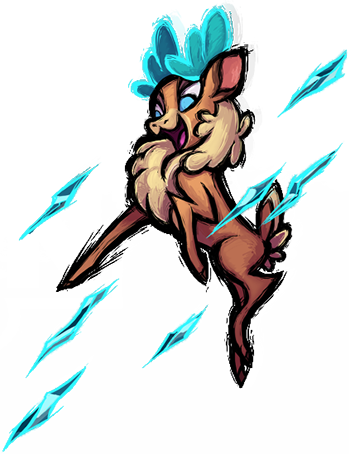 Voiced by: Tia Ballard
"Don't be ashamed, you were beaten by zhe best!"

Velvet will be the playable protagonist in Story Mode: Chapter 2.

Velvet specializes in keeping her opponents at a distance and stopping them with a blizzard of projectiles. Her magic meter has six bars, which start off empty and automatically recharge over time, and can be spent to quickly launch snowballs at her opponent, or move her opponent around with strong winds. 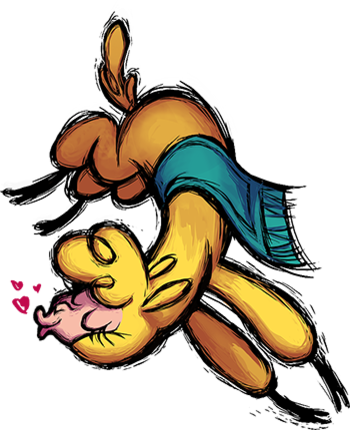 Paprika is a charge character, meaning her special attacks have to be planned in advance. Her magic meter has 6 bars and starts out full, but can never be refilled until the round ends. She can spend her magic on projectiles that either allow some mix-ups by hitting high or low, or stay on the ground, where either player can eat them to recover slightly but become vulnerable. 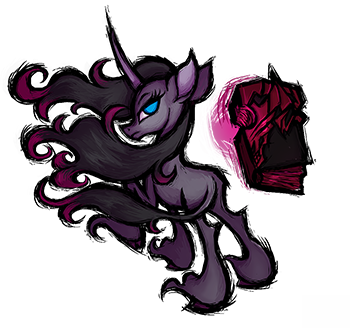 Voiced by: Alexa Kahn
Oleander: "My magic may be dark, but it will bring light to the world."
Fhtng: "Yeah, or dark, either one."

Oleander is an all-rounder who specializes in mid-range combat and traps. She can keep her opponent away with projectiles and traps, but she can also hold her own in melee due to her disjointed hitboxes. Her magic meter has 3 bars which start out empty, and fill up whenever she studies from her book. She can spend her meter on enhanced special moves or to lay traps. 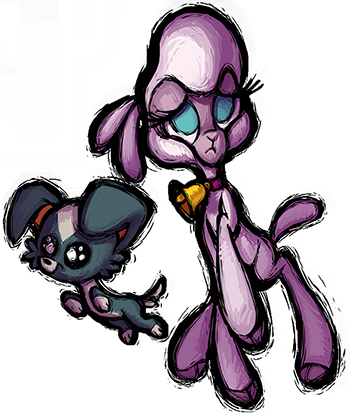 Voiced by: Allie Moreno
"You wouldn't hit a wee lamb, would ye?"

Pom is a Puppet Fighter who summons her dogs to attack at her command. Her magic meter starts out full with 3 bars, and is spent on summoning the aforementioned dogs. Each type of dog has a different magic cost, which is slowly refunded once the dog is dismissed. 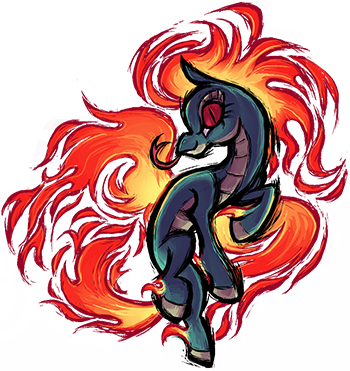 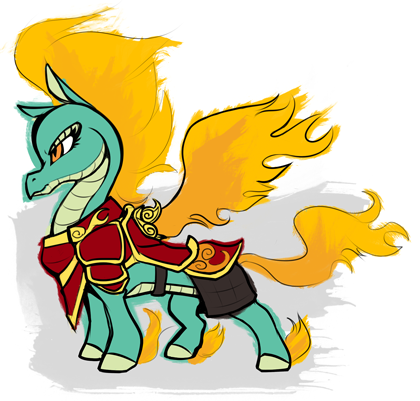 Tianhuo is a mobile fighter who does best at close range and in the air. Her magic meter has 2 bars, which can be spent on Firecracker attacks that let her move and attack at the same time, or quickly retreat. Her magic refills automatically over time, except when she is flying. 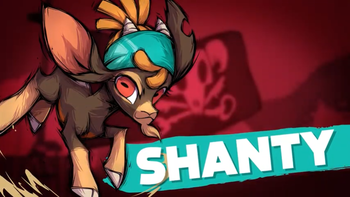 Voiced by: Afi Ekulona
"That key's as good as mine!"

A Pirate Girl goat, Shanty was obtained with the second crowdfunding stretch goal and was added in the 2.0 update in March 2021. See her trailer here

In-game, Shanty is a mobile fighter with a focus on short-range attacks. Her magic meter starts off empty each round, and can hold up to six charges. Shanty's Magic slowly fills up over time, but can also be manually charged by using Parley, which can grant up to three bars of Magic depending on how long it's charged up, regardless of if the attack hits or not. Magic can be spent to enter a Run stance with different attacks and movement, or to climb walls (which has another set of unique attacks). 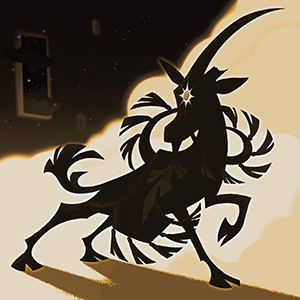 An important oryx figure from Fœnum legend. Tired of living in fear of the predators, and guided by her ancestor's spirits, she discovered a portal her predecessors used as a passageway to the afterlife. Inside was a void-like chamber that led to other worlds. One of the doors led back to Fœnum while another door led to a realm known as The Void. She knew this was the place where the predators should belong. Under her guidance, the nations of Fœnum fought a long and costly war to drive the predators through the void and into the Hold. The Prophet then used an Enchanted Key, made from one of her magnificent horns, locking both the door to the Hold and the door to Fœnum, ensuring peace forever. Well, except now. 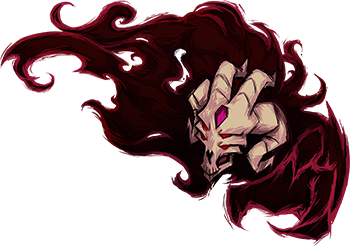 FHTNG TH§ ¿NSP§KBL?, or "Fred" as Oleander calls him, is a demonic entity who lives inside the Unicornomicon (Oleander's magic book), and is presumably the source of that book's power. Parts of his body sometimes manifest from the book in a semi-corporeal form.

Advertisement:
The Ice Sprites
Small, very mysterious, elflike creatures who have formed a special relationship with the deerfolk, and helped them build their city. They also provide them with special magical oats that give them the ability to fly and use Winter Magic. They happen to be the only sapient bipedal species in Fœnum. No one really knows where they came from, or why they have a great and almost obsessive fascination with the Reindeer.
Cashmere and Cap 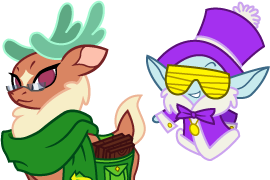 A duo consisting of a deer (Cashmere) and an ice sprite (Cap). They run the shop in the pixel lobby, where players can spend their salt on hats and other accessories.

Cashmere is also the cousin of one of the game's champions, Velvet.

Tropes relating to both

Sheep dogs are the only full predator to live peacefully in Fœnum alongside Ungulates. They are Loyal Canine Companions to the Sheeple, and are very protective of them. A pack of puppies note Their names are Woof, Ruff, Tuft and Puff in the Book of Lore, but this may no longer be canon. In game Pom has several, along with their mother and father. follow Pom on her quest to save the world. Or more specifically, they drag her into it.

Arizona's father and the tough, brave leader of the cattlekind.In Story Mode, he had to let his daughter Arizona go when she volunteered after some convincing from his wife because there aren't any other volunteers.

A cow Arizona meets when first starting her quest. And the first NPC encountered.

The toughest of all the deerfolk, he was the one who challenged Velvet. She managed to beat him easily using her Winter Magic, and he found himself falling in love with her as she left.

Velvet's father, leader of the deerfolk and the jarl of Reine City.

The High Priestess of the Order of the Horn

The well-intentioned leader of the unicorns. She, along with the others, is horrified when she sees Oleander's coat turned black, since it means she's been dabbling in dark magic. She and the other unicorns are quick to ostracize her for this.

The leader of the alpacas, and the narrator of Paprika's chapter in the Book of Lore. He does not approve of Paprika's upbeat nature and is more than happy to get rid of her.

Gets a minor role in Paprika's backstory. He's the one who hears of the championship being held.

The, erm, Prime Minister of the sheep.

The Empire of Huoshan

The Empress of Huoshan

The Empress of Huoshan, also known as the Daughter of Heaven and the one who choose Tianhuo to be the Key Keeper.

The spirit of the dragoness who gave rise to the Longma.

The spirit of the stallion who sired the Longma.
Other

A young zebra that encountered the predators before the start of the story.

A white rhino who asks Ribbon about their encounter with the predators.

A demonic book that FHTNG is contained inside of, and Oleander uses for dark magic.

Voiced by: Jessica Gee-George
Announces characters and calls out rounds starting, and KOs. Shows a bit more personality than most announcers.

Long ago, the lives of the ungulates of Fœnum were threatened daily by the presence of predators. These carnivorous beasts had been banished to a magical realm known as the Hold long ago, ushering an age of peace for the herbivores. Now that peace has been threatened: countless numbers of them have escaped their supernatural prison and are now threatening to infiltrate Fœnum en mass, led by the greatest and most horrible of all, known as The Devourer.

The predators themselves include wolves, lions, hyenas, crocodiles, bears, jaguars and many many others.

Simplified NPC fighters who appear in the Visual Lobby as PVE enemies and in the Arcade Mode as a Boss Rush fight. Each one of them represents a single fighting game strategy.

NPC fighters that are encountered in the Salt Mines, summoned by Fluffers.

The greatest and most horrible of all the Predators and the leader of the invasion.