Teacher/Student Romance
aka: Hot For Teacher 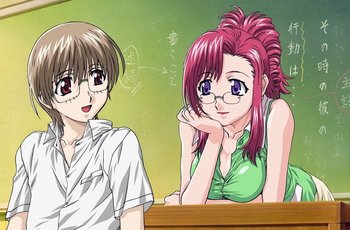 The relationship may be initiated by a Fille Fatale. A subtrope of Unequal Pairing, and also frequently overlaps with Power Dynamics Kink. Compare Mrs. Robinson. See Likes Older Men, Likes Older Women, and Stacy's Mom for young people lusting after older people in general, Precocious Crush for a more innocent variant, Age-Gap Romance for when there's a significant age difference between them, Inherently Attractive Profession when the teacher position is part of the appeal, and Mentor Ship, when fans ship a mentor and their protegee. Can lead to I Will Wait for You if the teacher decides to wait until their pupil has graduated to get together with them. There's a version specific to magic users called Merlin and Nimue, which takes its cue from Arthurian Legend where Merlin formed such a pair with several women. Teacher/Parent Romance occurs when a teacher falls for their student's parent.