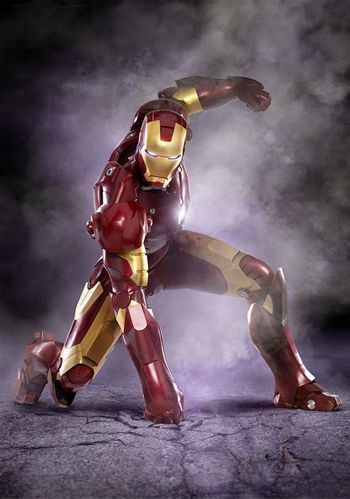 Fast. Bulletproof. Sleek. Even solved the icing problem.
"A suit isn't a space suit — although it can serve as one. It is not primarily armor — although the Knights of the Round Table were not armored as well as we are... A suit is not a ship but it can fly, a little — on the other hand neither spaceships nor atmosphere craft can fight against a man in a suit except by saturation bombing of the area he is in."
— Starship Troopers
Advertisement:

In order to boost the wearer's mobility, certain armor versions also have built-in thrusters that allow them to fly, at least for short distances or via rocket-assisted jumps. If this gives them good mobility and speed without sacrificing protection, the users often join the Lightning Bruiser camp, with the disadvantage, if any, being bulk and low maneuverability. There might, however, be variants that are (comparative) Fragile Speedsters, which forego the thick plating in lieu of even more equipment made to amplify the movements of its wearer, providing a boost to agility and movement speed.

As the powered armor allows for ample spare carrying capacity, it often comes equipped with many useful gadgets built in. If it does this with weapons, then it's a wearable Swiss-Army Weapon; expect at least one of these to be an Arm Cannon, or possibly a Power Fist. Shoulders of Doom (and in turn, Shoulder Cannons) are almost mandatory. It may also provide emergency medical support to the wearer, if they manage to get injured in spite of the armor's protection. A Man in the Machine may have such a suit doubling as a life support unit, likely unable to remove the suit without risking death. Some suits are also capable of taking over, being controlled remotely or autonomously if the wearer becomes incapacitated — or as a Restraining Bolt in case they refuse to follow orders. Often, the suit's computer is an Artificial Intelligence capable of acting as Mission Control, as well as controlling the systems the wearer can't pay attention to in the heat of combat. Some suits of Powered Armor are explicitly made to be Adaptive Armor capable of great versatility and effectively repairing and upgrading themselves. Too much of this can result in them becoming a sort of wearable Do-Anything Robot. With crystals.

Digitally-constructed armor that protects the user from conventional firepower and boosts their physical abilities. It is especially devestating when worn by cyborgs like Omega and Xero.

Digitally-constructed armor that protects the user from conventional firepower and boosts their physical abilities. It is especially devestating when worn by cyborgs like Omega and Xero.