Literature / The Chronicles Of Fid 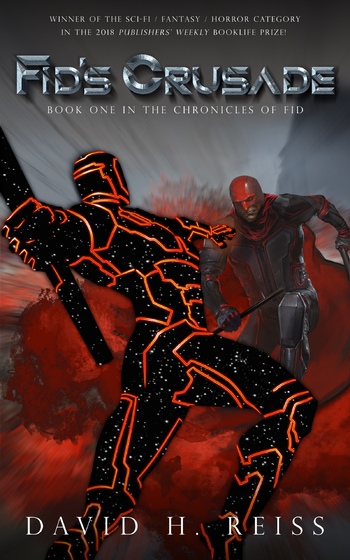 'The Chronicles of Fid'' is a sci-fi / contemporary fantasy / superheroic series of novels by David H. Reiss. The stories follow the life, adventures, and emotional evolution of Dr. Terrance Markham…and his powered armor wearing alter-ego, the supervillainous Doctor Fid.
Advertisement:

Terrance Markham was a brilliant but socially awkward young college professor, an inventor and polymath who excelled in several of the hard sciences. His quiet, comfortable life in academia was unfortunately short-lived; when his little brother was caught in the middle of a superpowered battle, a tragedy occurred that shredded all of Terry's plans for the future.

Half-mad with grief and guilt, Terry came to blame the superhero who was present even more than the supervillain who initiated the conflict. Terrance withdrew from public life and, in secret, began building a suit of powered armor with which he could obtain a pyrrhic revenge. Taking on the nom de guerre of Doctor Fid, Terry quickly became one of the most feared supervillains on Earth. Never caught and never unmasked, the archvillain spent years striking terror into the hearts of heroes and civilians alike.

But that was twenty years ago, and much has changed in the intervening decades. Doctor Fid’s goals have shifted, as have Terry Markham’s. Dr. Markham himself has become a successful businessman; his villainous counterpart, on the other hand, has taken on the responsibility to punish those heroes who he believes to be unworthy of their accolades.

Along the way, he adopts an adorable young Artificial Intelligence / android named Whisper, saves the world, fights forest fires, rescues earthquake victims, saves his city, saves another world...and beats up a lot of people who may or may not have deserved it.

The chronicles focus as much on the characters’ inner conflicts as upon the superpowered battles. Told in largely anachronic order, the villain protagonist’s backstory and motivations are explored throughout the novels’ adventures.

Currently, the series consists of Fid’s Crusade, Behind Distant Stars, and Starfall.