I Call It "Vera"
aka: I Call Her Vera 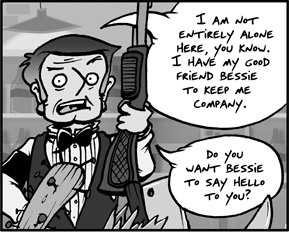 Why, hello, Bessie!
"Six men came to kill me one time, and the best of them carried this. It's a Callahan Full-bore Auto-lock. Customized trigger, double cartridge, thorough gauge. This is my very favorite gun... I call it 'Vera'."
— Jayne Cobb, Firefly
Advertisement:

Some people have really strong emotions about their weapons. So much so, they give them a name. Anyone who does this either has a sentimental attachment to said weapon, is a veteran from some war, is a major Gun Nut, is a person who lost their love and still remembers them, is generally insane, or is some combination of the above. In any case, someone who gives a name to their gun or knife is usually someone to watch out for and generally not one to mess with. Naturally, anyone who does this is considered fair game for Cargo Ship jokes.

A subtrope of Named Weapons — this trope only applies when the name is a nickname given by the wielder, not a name the wielder is informed of by word of mouth or writing, or as an otherwise "official" name. "Vera" CAN graduate to a "true name" if used in great deeds and accepted by many.

Sister trope to Cute as a Bouncing Betty (when a type of weapon is given a cute name), Legendary Weapon (for when the name and the weapon become truly famous), and Stock Weapon Names (for when common names are used between works). The inverse is They Call Him "Sword", which occurs when somebody gets nicknamed for a weapon. Empathic Weapons and Evil Weapons are a different issue. Ships and planes nearly always have a name. I Call Him "Mister Happy" is a different named "weapon". No relation to And Call Him "George"!.

"The Piece of Shit"

After going out of the way to craft Kirito a unique high-level sword that hasn't been made yet in the game, Lizbeth learns exactly what he decided to name it.

"The Piece of Shit"

After going out of the way to craft Kirito a unique high-level sword that hasn't been made yet in the game, Lizbeth learns exactly what he decided to name it.