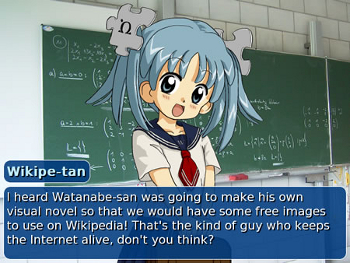 "Visual Novel" is a genre of interactive media, typicallynote Whather or not visual novels are quote-unquote "video games" is a notoriously controversial topic considered a type of Video Game and a subgenre of Adventure Games, that involves multiple distinctive interactive and narrative design traits, all of which originates from a Japanese branch of adventure game design.
Advertisement:

Definition and Features Mechanically, visual novels feature a very strong emphasis on a text-based story over gameplay, to the degree that most of the game is simply the player pressing a button to advance the text. Narratively, visual novels are inseparable from Japanese popular media tropes, and, over time, has developed their own set of narrative and visual tropes that defined their own "visual novel feel".

Narratively and mechanically, visual novels typically consist of first-person narratives structured in click-through text boxes. The majority of visual novels tend to focus on non-linear Story Branching plots with Multiple Endings and often a Choice-and-Consequence System, and they can be seen as a digital evolution of Gamebooks (think CYOA). Their digital medium grants them many mechanical and visual features that are impossible in physical books, such as visuals, music, voice acting, and in some cases, a lot more story branching influence.

for instance calls 428 "visual novel for people who don’t like visual novels".

The relationship between VN presentation and actual hands-on gameplay is... complicated. The simple nature of VN presentation means that it is easy to implement VN tropes in a wide variety of games, making it difficult to determine where does VN end and where does "normal video games" start; the ruleset provided by the Visual Novel Database

is a popular attempt to codify a set of criteria. On the far video game end of the scale, we have games that adhere closer to the Adventure Game model, such as the Ace Attorney series which often gives the player interactive puzzles, the Zero Escape series which often gives the player playable escape rooms, and the Danganronpa series which has playable rhythm game-like minigames.note Some of the earliest examples of games now considered visual novels, such as Snatcher, are in fact adventure games in all but name, complete with text parsers and/or point-and-click interfaces; the distinction between the two genres is largely a matter of divergent evolution, with the main spur driving the divergence (as explained by the Digital Antiquarian

) being the difficulty of implementing the typical Verb-Object command structure of English-language adventure games in anything resembling grammatically correct Japanese. On the other side of the scale are Kinetic Novels: visual novels with no choices and no gameplay at all (besides simply clicking to advance the text), such as the When They Cry series.

Visual Novels in Japan Visual novels in Japan are divided into two different categories: the Novel Game (NVL), which are "VN proper" containing little to no gameplay other than decision-making (e.g. Higurashi: When They Cry), and the Adventure Game (ADV), which contain puzzles or other forms of gameplay (e.g. Nine Hours, Nine Persons, Nine Doors). The two categories are re-merged into VNs in the west, usually because of the latter category's heavy usage of visual novel narrative and visual tropes.

Visual novels that are also eroge tend to tie every storyline to a specific romanceable character, a habit which has carried over to much of the rest of the medium. Visual novels that are 95% porn to 5% plot fall under the sub-genre of "nukige". A related term to visual novel is "sound novel", which was originally used by Chunsoft for their visual novels, as they relied on sound in order to help convey the story. Today, however, the two terms are considered to be readily interchangeable as virtually all visual novels have their own soundtracks anyway (and use it to augment their storytelling).

Within Japan, visual novels make up around 70 percent of the PC gaming market, according to The Other Wiki. It is also not uncommon for acclaimed anime to be based on visual novels, such as Kanon, AIR, CLANNAD, Fate/stay night, and Steins;Gate. Sometimes these animes can serve as continuations of the story, and sometimes they are adaptations.

Visual Novels in the West Many visual novels are restricted to Japanese markets, but games such as Hotel Dusk: Room 215 and Jake Hunter, as well as the Zero Escape and Ace Attorney series, have popularized the genre internationally. Most Japanese visual novels never get an official release outside of Japan, though this is beginning to change with companies such as MangaGamer, JAST, Sekai Project, and Neko Nyan licensing more and more visual novels. Some visual novels that have been ignored by official localizers get translated by dedicated fans. Many of the ones on this list have an existing Fan Translation, partial or full. That being said, a majority of visual novels being translated and released now tend to have a professional translation, as more dedicated translation companies appear. In fact, many professional translators started out as fan translators over the past 10 years.

Before The New '10s, most visual novels that did get localized suffered from the same problems that anime in the early '90s did: the localizers seemed to prefer to import the most sexual and/or violent titles. However, with the advent of Steam, its Greenlight program, and crowdfunding sites like Kickstarter (all of which have also aided the revival of Western adventure gaming), the number and availability of visual novels outside Japan have been steadily expanding. Since Steam disallowed explicit sexual content till 2018, the games available there were mostly either "clean" versions of explicit games or games without any explicit content in the first place.

There is also a small but growing number of English-developed visual novels, generally created by indie developers and not distributed through mainstream channels. Some of these have garnered critical acclaim, such as Katawa Shoujo and Analogue: A Hate Story. In recent years, there have also been some acclaimed Western games that seem to be strongly influenced by visual novels (with the main distinction being that they tell their story via real-time cutscenes instead of text you click to advance), such as Dear Esther, The Stanley Parable, Heavy Rain, and The Walking Dead; many of these have come to be classified as Environmental Narrative Games. A lot of Western-produced VNs are developed in the popular Ren'Py Game Maker, though many developers are shifting towards the use of Unity's Naninovel

Genre Confusions Because the market for Dating Sims is virtually non-existent outside of Japan, people tend to assume that any visual novel that is a Romance Game should be called a dating sim, when they are actually quite different. (It doesn't help that most Visual Novel-style eroge are marketed as "dating sims" when they are translated for the US market.) Using well-known examples, the Ace Attorney series has very much a Visual Novel style of gameplay, while the DOA Xtreme series is probably the game closest to a true Dating Sim with mass-market appeal in the US.

Whether or not "visual novel" is a genre, a sub-genre/modifier for other genres, or a pejorative term is unclear, as connotations differ by community. Public Medium Ignorance, particularly from the Animation Age Ghetto and Girl-Show Ghetto, may be responsible for quite a bit of the confusion. A lot of people also think that all VNs are eroge, similar in many ways to the belief that all anime is Hentai. Some of the games that do make it across the border, like Time Hollow, have been decried by reviewers for having "no gameplay", which to a fan of VNs is Comically Missing the Point.

See Visual Novel Tropes. If you want to take a crack at creating one of your own, we've got you covered.

Visual Novels are not to be confused with Light Novels (see page for more information).

Games in this medium:

Other examples of Visual Novels: