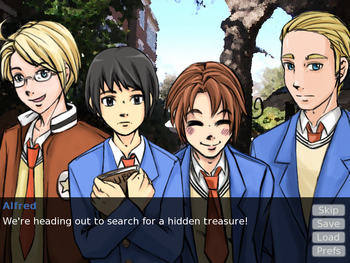 Project NA is an ongoing, episodic Axis Powers Hetalia fangame distributed through LiveJournal and DeviantArt. Though not as well-known as certain other games within the same fandom, it distinguishes itself in three main ways: 1) it's a Visual Novel, not an RPG; 2) it's in English, so everyone reading this article can actually play it rather than watching subtitled videos; and 3) like this list, it only lasts for three parts.

Matthew Williams is the newest student at Hetalia World Academy. On his first day, he meets his doppelganger in the form of self-proclaimed school hero Alfred F. Jones. Their already-strange circumstances take a turn for the extra weird when both Alfred and Matthew start developing superpowers for no apparent reason, and the two must work together to figure out what's happening before it spirals out of their control.

Chapter 1 can be found here,

and Chapter 2 is here,

with a third and final installment in the works. The first chapter was developed in Ren'Py.