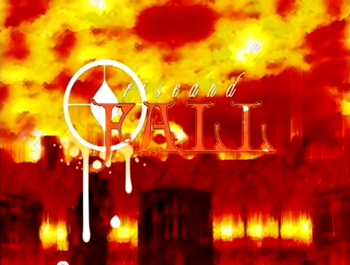 "I, October Greyson, believe that a truly incredible tragedy has occurred here. These murders are the work of a monster."

Rise and Fall is a Visual Novel based off several characters from the UTAU fandom, written and predominantly sprited by prominent fandom member scarfu (though with assisted art from many other people who have dubbed themselves "Faguar Productions" and borrowing some CGs and music). While it uses the Ren'Py engine and is functionally a Visual Novel, it has no choices and generally plays out like a regular, illustrated story.

At Redwood School, a big school of posh rich wealthy kids invested in the arts, a new year has started. Aside from the upcoming competition guaranteed to make one particular student fabulously famous called "The Rankings", the somewhat stacked-up high-school-like culture, and the reclusive headmaster who doesn't seem to come out much, the school seems pretty normal for now.

Then, on the first day during an assembly, a fire strikes three buildings of the facility, sending five students to the hospital. Immediately the school goes into panic, and fingers are pointed. The mysterious headmaster recruits a detective named October to solve the problem, but the headmaster's somewhat...strange...antics haven't escaped the notice of three students: Kaen, Sachi, and Lucy. Things get even more complicated when Lucy's sister, Violetta, a secret agent, comes into the picture - and promptly ends up standing with the mysterious headmaster, where absolutely nobody can figure out what she's working for. Kaen's general history as a Pyromaniac isn't helping matters. And the body count keeps rising...

The first of four chapters has been released

, and comprises about 6 hours. Around 50 characters are planned to eventually appear.

Tropes found in Rise and Fall: