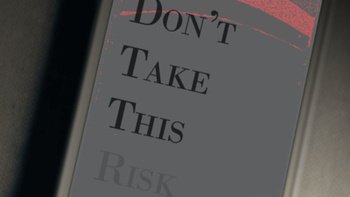 "...Hello? This is... This is the suicide hotline, yes?"
Advertisement:

Oops, wrong number. But you may not want to tell that to the man on the other side of the phone.

You play as a young woman who receives a call from an unknown number, mistakenly trying to reach the suicide hotline. You're given the choice of trying to defuse the situation, but with limited time and knowledge, how can you help a man that's already so close to the edge? What could you give a complete stranger that would give him a reason to live?

Love, maybe. But things could get twisted fast... it's better not to take that risk.

, created for the Asylum Jam.

The mysterious man on the other end of the line is set to appear in Beauty and the War: X Playing Pieces, where his name and past will be fully revealed.

. It now has a webtoon that can be read here