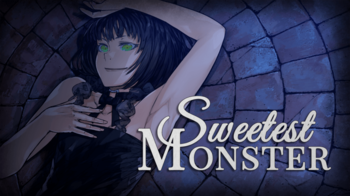 Who's the real monster here?
"I love you for who you are. I’ve loved you from the moment I met you."
- Bell
Advertisement:

Robin Hawkins is down on his luck. His relationship with his wife, Sally, is stagnating, and his daughter, Melody, no longer speaks to him. Stuck in an unsatisfying and draining job, Robin's life is one long, monotonous slog... Until he meets the mysterious girl of his dreams in the middle of the night, Bell. However, there is far more to Bell than meets the eye - and Robin's 'dreams' are fast in danger of becoming 'nightmares'.

A short psychological horror Visual Novel by Ebi-hime, creator of The Way We All Go, Strawberry Vinegar, The Sad Story of Emeline Burns, and other indie Visual Novel titles.