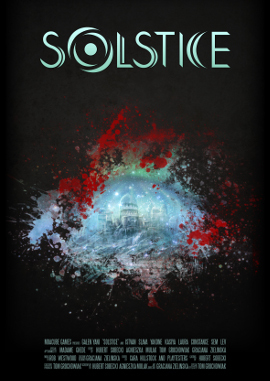 Solstice is a visual novel by Moa Cube, the same team that has brought us Cinders.

In the Far North, amidst the ice and snow, a city with architecture reminiscent of Central Asia stands upon the hot springs beneath the earth. A magical dome protects it from the harsh environment. Two outsiders - Galen, the healer, and Yani, the technician - arrive at the same time, ostensibly in order to temporarily use their respective skills for the benefit of the merchants who ruthlessly rule this place. All of a sudden, a local madman disappears, and, since the city has been isolated for the winter season and is now barely populated, this leaves a very narrow circle of suspects. Our two heroes begin their investigations, but as the mystical Solstice event draws near, they may find out more than they would like.