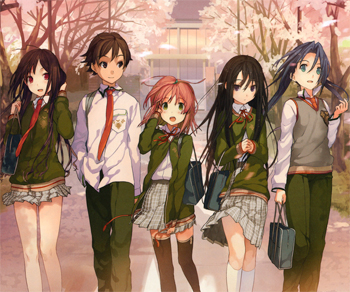 In English, "I Wanna Tell Big Brother I'm His Sister Right Now!" (or according to the official subtitle, "I wanna say that I'm not your brother right now!"). There probably seems to be a bit of a discrepancy between those two things, but we'll get to that in a moment.

Whatever your preferred flavor of English title, Ima Sugu ni Onii-chan ni Imouto da tte Iitai!—Ima Imo for short—is an all-ages Visual Novel created by Fairys (the all-ages branch of Sprite) planned for a December 2012 release. It is a sister work to Love, Election & Chocolate, and takes place in the same universe; like Koi Choco, Ima Imo has extremely high production values, with art by Akinashi Yuu, music by I've Sound and many popular bands and singers (Minori Chihara, eufonius, marble, Ceui, and Yuuki Aira), and an all-star voice cast.

Our hero, 15-year-old everyboy Mitani Rikuto, is currently adjusting to his new family life after his father Naoma's second marriage, moving in with his stepmother Ryouko and younger stepbrother Ayumu. Ayumu is small and delicate and generally looks like a girl, and life in the same household is a strange and heart-pounding exercise for young Rikuto. In spring, Rikuto and Ayumu are set to enroll in the same high school, Asaoka Gakuen—but for some reason, Ayumu has registered as a female student, and will be wearing the girls' uniform!

Unbeknownst to Rikuto, Ayumu is very much female, but her mother has instructed her to pretend to be a boy while at home so that she can stay in the same room as her brother in their small apartment. With the start of the new school year, it doesn't seem like the boy-in-the-household, girl-outside-it routine will be able to hold for very long—and above all else, as Ayumu comes to know and like Rikuto more, her distress at having to lie to him about her gender grows every day.

Meanwhile, as Rikuto starts high school not knowing which way is up, he and Ayumu become friends with three other girls—Matsuri, Mao, and Kimika. Rikuto slowly begins to understand that all four of his friends seem to be hiding things that are keeping them from moving forward...

The heroines you can romance are: