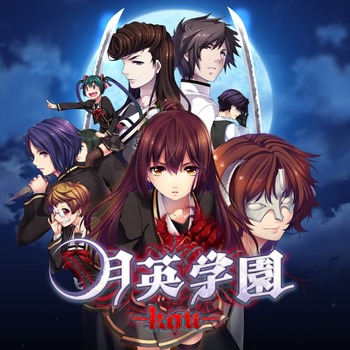 One fine day, while Tomokazu Sugita was hanging out at Arc System Works, he and the staff of BlazBlue decided to adapt his doujin light novel into a visual novel. And thus Getsuei Academy Kou was made.

Getsuei Academy Kou follows the story of Hiroshi Tomoya who on his first day of transferring to a new school, gets attacked by a being known as a "Hazard". He's then saved by a girl named Eiri Mitsuki, who suddenly kills him off for some reason. He then wakes up and finds out that the date on the calendar shows that it was the day that he gets transferred to his new school. He then sets out to find out what these "Hazards" are and fight against them with the help of the student council.

Originally a doujinshi game made by AGRS (aka Tomokazu Sugita with his buddies at his agency, Atomic Monkey) for the PC, Getsuei Academy Kou is a Visual Novel for the Playstation Vita and was released in Japan on October 10, 2013. It was then ported to Steam but only in Japanese.