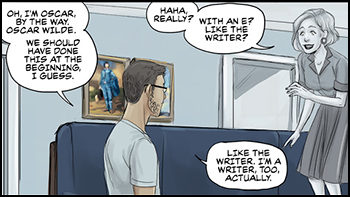 "My name is Fear Kubrick. I am in no way related to the movie director."
— Fear Kubrick, Cube×Cursed×Curious
Advertisement:

A surprisingly common form of Theme Naming is the practice of naming characters after real-life celebrities and famous people.

One way this can be done is to give a group of characters a set of names which, when combined, form the name of a famous person. An advanced version gives a person the same first name as a famous person and has their last name included as a middle name. Another variation is to give a group of characters the first names of a well-known group, such as a group of friends named John, Paul, George, and Richard/Ringo, after The Beatles.

If characters are named after things like famous killers or conquerors, it overlaps with Names to Run Away from Really Fast.

Compare Shout-Out Theme Naming, Famous-Named Foreigner (when foreign characters are named after famous people from their countries just because the creators didn't research the relevant naming conventions) and Character Name Alias (when the name in question isn't actually the character's real name but a fake one that they're using after a real or fictional famous person), and Unusual Pop Culture Name (when they're named for a famous character, often embarrassingly). Contrast "Near and Dear" Baby Naming. If the character hates their given name (for example an atheist given an overly religious name) then they may invoke Do Not Call Me "Paul". When the famous person a character is named for is their own actor, it's The Danza.

Not to be confused with Named Like My Name, Historical Domain Character, or Beethoven Was an Alien Spy.

Alternative Title(s): Named After Someone Famous