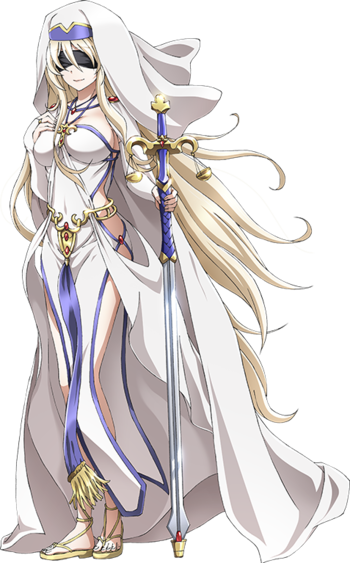 With these eyes, I see many things... things you cannot imagine...

A blind woman and former Gold-ranked adventurer who runs the Temple of Law as Archbishop of the Supreme God. Having heard of Goblin Slayer's achievements, she enlists him and his party to slay goblins infesting the sewers underneath Water Town, the city her temple oversees.

Noble Fencer after the events of Volume 5

An aristocratic young woman who ran away from home to become an adventurer. The plot of the fifth volume of the light novel is kicked off when Goblin Slayer and his party are hired to recover her when she goes missing hunting goblins in an ice mountain. 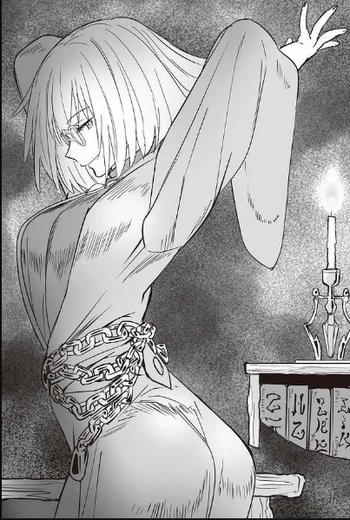 A former general of the Kingdom. Leaves the army in Year One Volume 2 to study monsters on the frontier, and ends up hiring the young Goblin Slayer as a guard and helper, becoming the source of most of his understanding of goblin ecology and anatomy.
Advertisement: 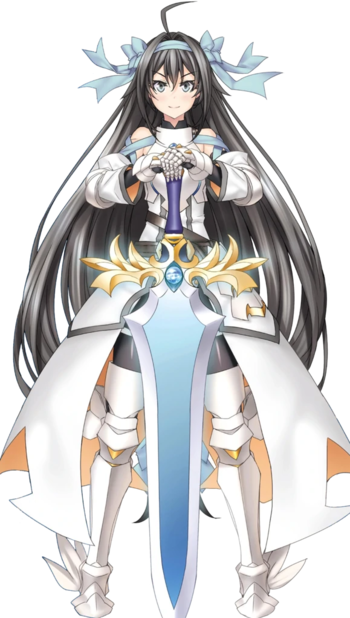 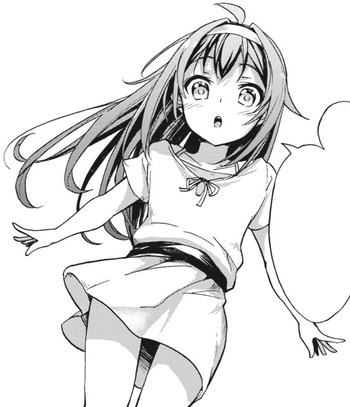 Chosen Heroine in Year One

A young adventuress who is destined to save the world, her rapidly-escalating quest to reach and defeat the Demon Lord runs in parallel to Goblin Slayer's various extermination missions. Though she hasn't gotten seriously involved with the Goblin Slayer and his group yet, she has had dealings with some of the more high-profile supporting characters they have already helped. 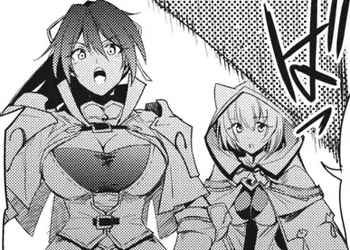 Two Gold-ranked adventuresses, Sword Saint and Sage, who team up with Chosen Heroine.

A former adventurer and current ruler of the country. 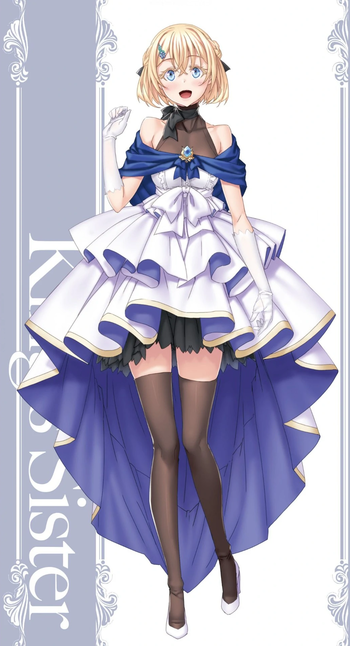 The King's little sister. A major person of interest in Volume 8.

All of the King's advisors and policymakers, in particular his personal inner circle of: An elderly minister, a red-haired cardinal, a tan-skinned court mage, a royal guardsman in silver armor, a Gold-ranked Padfoot adventurer-turned-advisor, and a silver-haired attendant.

The next in line ruler of the Desert Kingdom. Abducted after her parents were killed in an attempt to intimidate her into giving away her throne.

Handmaids
A pair of handmaidens to the Desert Princess, an elf and a rhea, trying to get help for their mistress.

An underground organization of unauthorised adventurers and related shady characters that do dirty work that not even the more conventional adventurers would do. 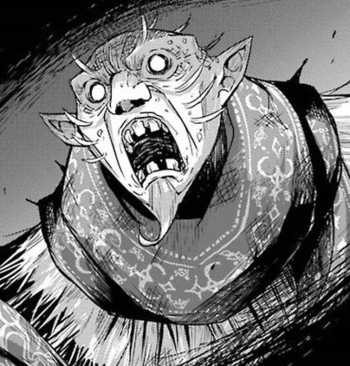 An old rhea who rescues the preteen Goblin Slayer from being run down by the goblins that destroyed his home village, and then trains him to become an adventurer. 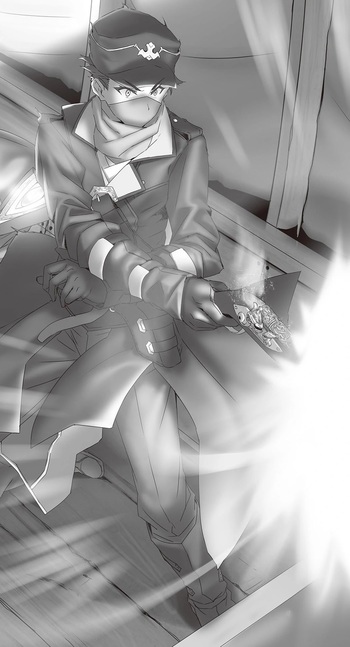 A masked Shadowrunner who fights with a gun. 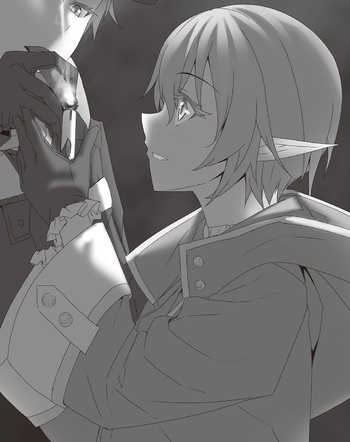 An elf-like woman who is a Shadowrunner alongside Spy. 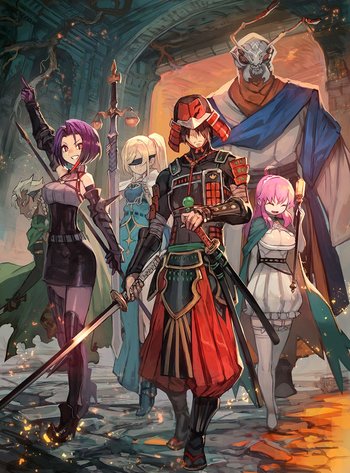 Sword Maiden's old adventuring party that worked together to kill the Demon Lord ten years before the start of the main series. The other members were Samurai Captain, Myrmidon Monk, Female Mage, Female Warrior, and Half-Elf Scout.

Samurai Captain
A young man from the East who wants to hurry and find the "source of the Death" to strike down the curse plagueing the land.
Female Warrior
A mysterious, flirtatious, and deadly Dungeon veteran that joins Samurai Captain right on the heels of losing her most recent party.
Half-Elf Scout
An irreverent human/dark elf mixed-blood that guides Samurai Captain and Female Mage into and through Fortress City.
Female Mage
Samurai Captain's cousin who follows and supports him on his quest.
Myrmidon Monk
A belligerently apathetic bugman priest of the Trade God who agrees to round out the party on a whim. 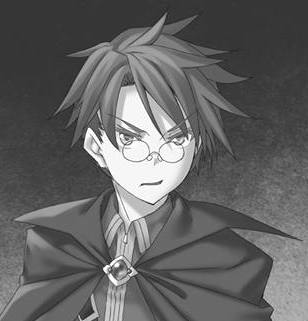 A newbie adventurer in Volume 6 who only wants to hunt goblins. 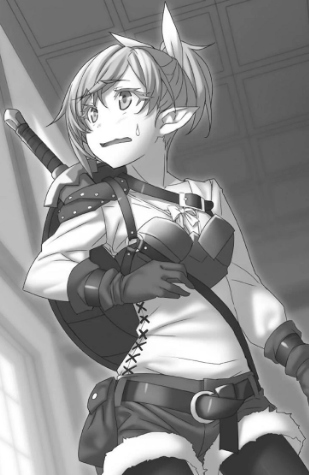 A newbie adventurer in Volume 6 that is desperate to learn all she can from the veterans before starting her own career, ends up becoming Wizard Boy's partner at the very end of the book. 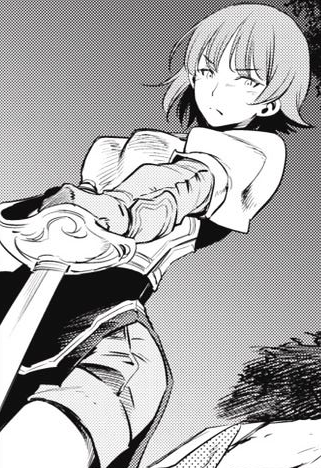 A young woman who made a mistake of sparing one goblin child and got killed by it for her trouble. The goblin child would later become the goblin lord that attacks the Farm Goblin Slayer lives at. 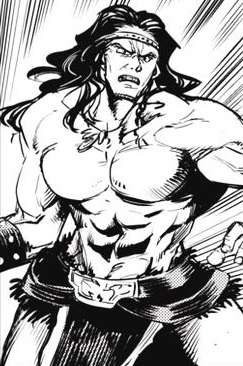 A mighty adventurer a goblin lord encountered and defeated during his rise to power. Barbarian's battleaxe would become a war trophy for the goblin lord and a major hindrance to Goblin Slayer. 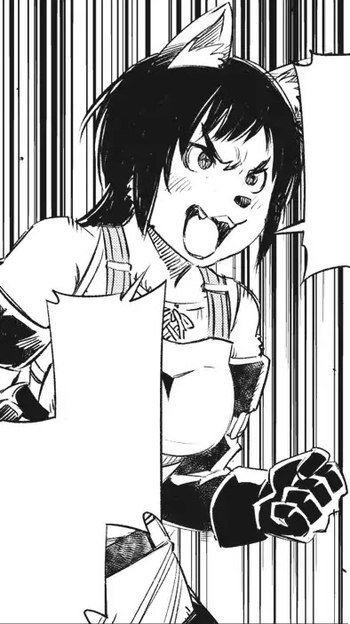 A young female dog-girl who is part of a military unit in Water Town. 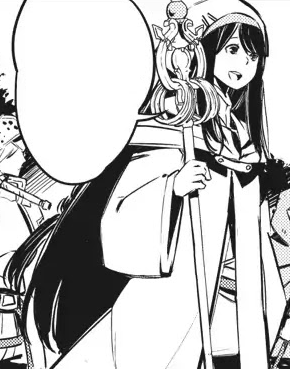 A young adventurer and priestess of the God of Knowledge, who met a tragic demise while escorting a wagon through a valley taken over by Evil Wizard. 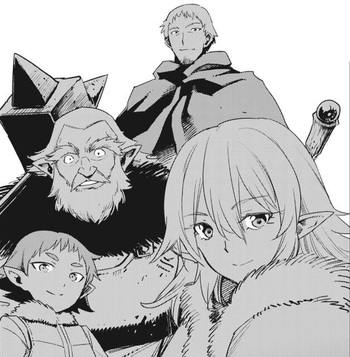 A group of four adventurers that were Noble Fencer's companions that were all lost in their calamitous goblin quest. Consisted of Half-Elf Fighter, Rhea Scout, Dwarf Monk, and Middle-Aged Wizard. 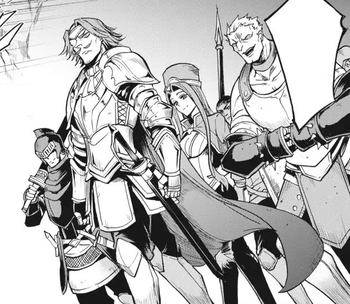 A Bronze-ranked adventurer who is the overall leader of the mass hunt for the rock eater at the end of Year One. 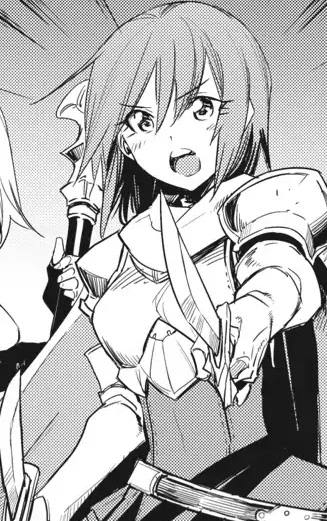 Another of Illusion's personal PCs who was meant to stop Dark Elf from obtaining the cursed artifact of Hecatoncheir on her first mission, which ended very badly for her.

High Elf Archer's older sister, and princess of the elves. Shows up in Volume 7 to invite the party to her wedding.

Shining Helm
High Elf Archer and Forest Princess' cousin, the former's scouting teacher, and the latter's fiance.
Starwind
The Chief of the Elves. Forest Princess and High Elf Archer's father.
Elf Scout
A scout for a nearby elf settlement in the forest who was assigned to spy on a goblin nest controlled by an ogre. Unfortunately, she was found out and captured by the goblins by the time Goblin Slayer's party arrived. 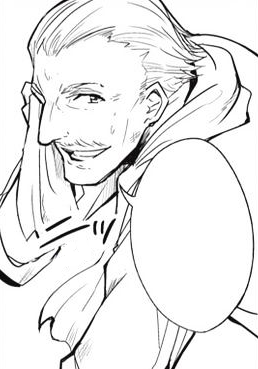 A dairy farmer and Cow Girl's current guardian after her parents death. 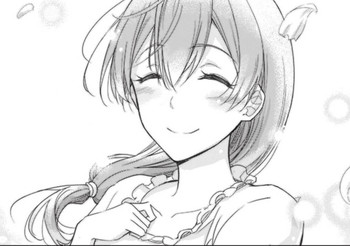 Goblin Slayer's older sister. Years before the main story began, she was raped and murdered by goblins right in front of her younger brother, which kickstarted his genocidal hatred of goblins. 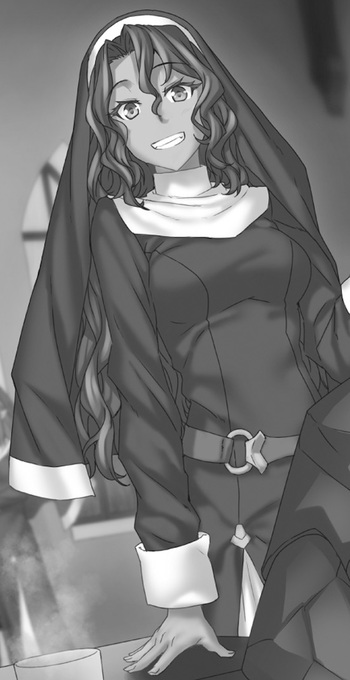 A nun devoted to the Earth Mother and Priestess' surrogate sister. Met in Volume 10 as the manager of a vineyard in a new town and the victim of some truly awful rumors.

An abbess devoted to the Earth Mother, and Priestess' direct superior. 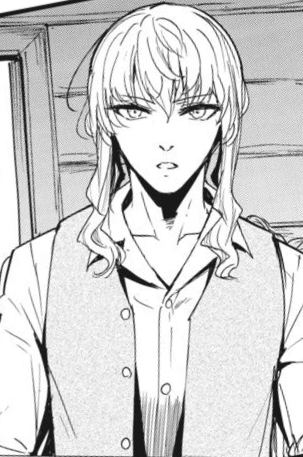 Heavy Warrior's best friend and a former mercenary who was forced into early retirement after receiving a Career-Ending Injury. He used his status as a war veteran to claim chieftainship of his hometown as a reward for his service. 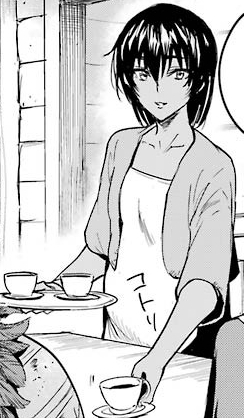 A village girl from Heavy Warrior's hometown. She was his former crush, but ended up settling down with his best friend instead, the Village Chief. 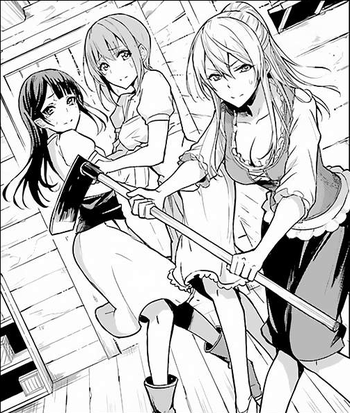 Three sisters that lived in same village as Goblin Slayer and Cow Girl, and were victims of the goblin attack on it. 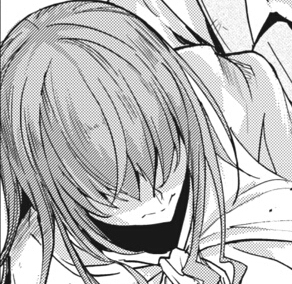 A captured village girl who spent a week in a goblin nest. She is the first person Goblin Slayer ever saved as an adventurer. 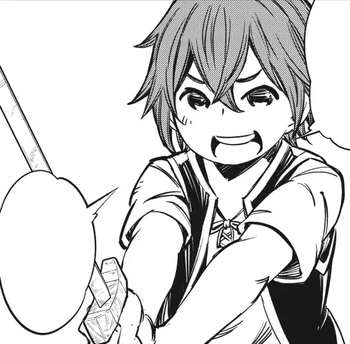 A little boy who Goblin Slayer saves from running into a goblin nest. 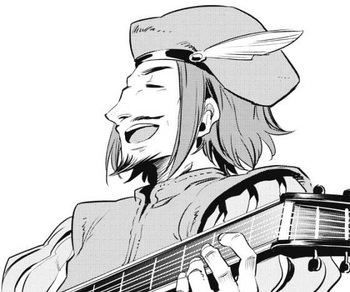 A bard that sings ballads of Goblin Slayer's adventures. 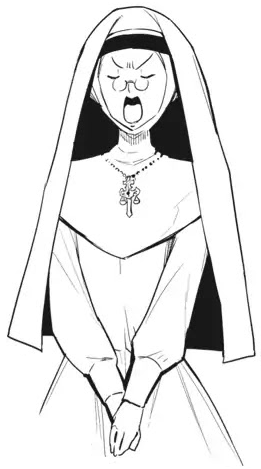 A nun of the Supreme God who serves as Sword Maiden's personal assistant. 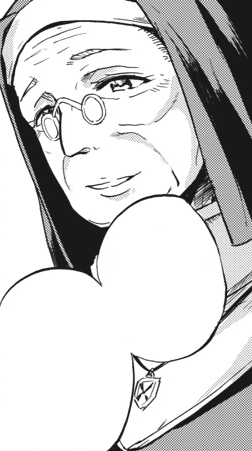 A nun who runs a convent to the God of Trade in the pioneer village where Chosen Heroine grew up.

Dilettante
A young man from the Capital University that feels it his purview to gainsay the adventurer promotion process.
Informant
An enigmatic young woman that occasionally gives Samurai Captain news and advice in Daikatana.
Garrison Commander
An old military woman that is now the superior officer of a fort on the eastern border.