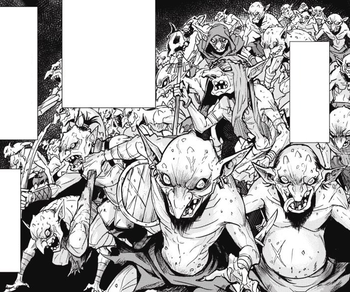 The very monsters that the Goblin Slayer is killing in his crusade. They're known for attacking various villages in the story. 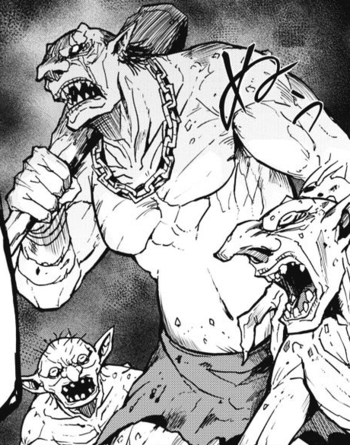 Goblins that have grown larger and put on more muscle. They act as bodyguards for nests. 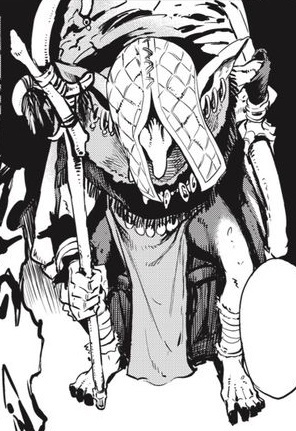 Goblins that have gained the ability to use magic. They often lead nests. 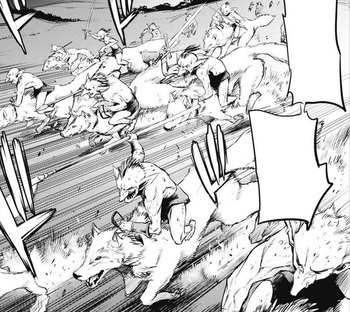 Goblins that have tamed captured wolves to the point they can use them as mounts. One in volume 11 acheives the ultimate dream of riding a dragon. Technically. 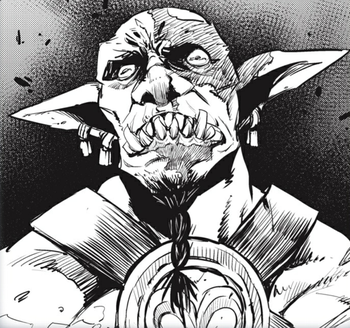 Heroes of the goblin race, those that have become large enough to even be seen as ogres in terms of strength. One serves as the main antagonist of Volume 2 of the light novel.

Kings of the goblin race, these goblins have gained intellect and ambition, allowing them to command hordes to great effectiveness.

WARNING: Due to the nature of this character, spoilers relating to Volume 5 are unmarked. 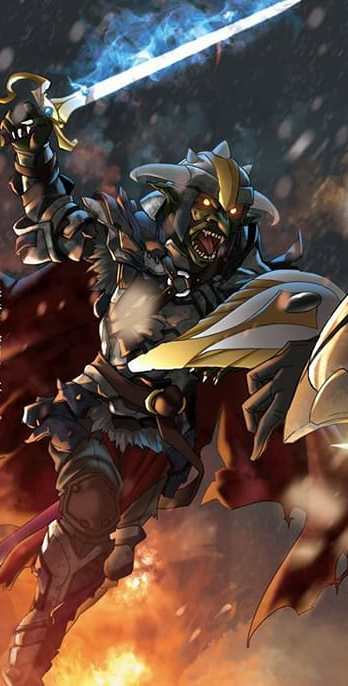 An utterly new breed of goblin encountered and fought by Goblin Slayer's party in Volume 5. Even smarter than a lord, as well equipped and martially skilled as a veteran adventurer — the new pinnacle of goblinkind and heralded as the "hero" of the goblin race.

Another new class of goblin with divinely gifted powers, encountered in Volume 8. 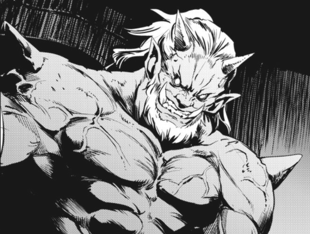 A minor antagonist occupying an ancient man-made fortress, he made his name in infamy for possessing both incredible strength and magical prowess. He was granted an army of goblins by one of the Demon Generals, which naturally draws the attention of Goblin Slayer and his team. 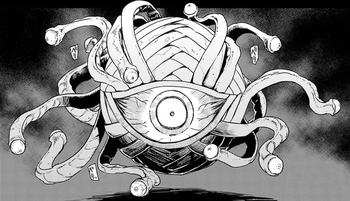 A multi-eyed monster found in the sewer labyrinth of Water Town in Volume 2, guarding the Gate mirror. 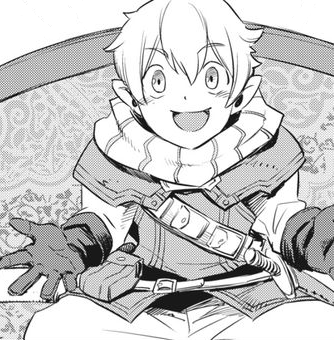 A former Steel-ranked adventurer who was disgraced after it was discovered he was hoarding loot for himself from his party. 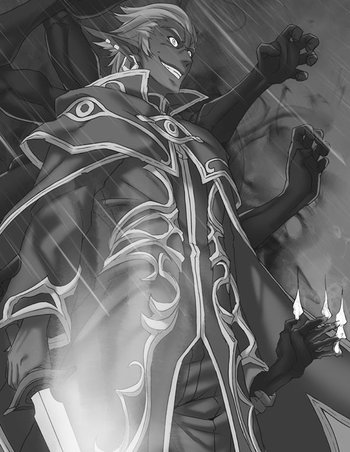 A summoner and remnant of Evil Sect, the nebulous cult operating beneath Water Town until a Platinum-ranked hero took it down. He attacked Goblin Slayer's town on the night of the Harvest Festival in a bid to summon Hecatoncheir, the hundred-handed giant. 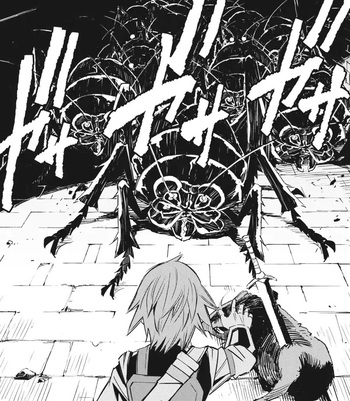 Giant Rats and Giant Cockroaches in the sewers. The lowest missions available, below even goblin clearing, but still dangerous if not properly prepared for beforehand. 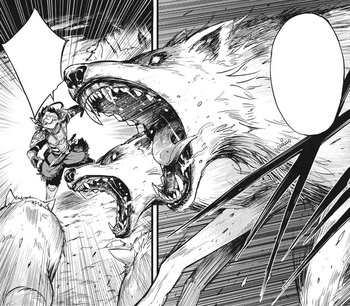 Wild canines that pose a constant threat to livestock and travelers. Goblins and other monster can occasionally tame them. Come in magically empowered or monstroiusly interbred varients, such as wargs. 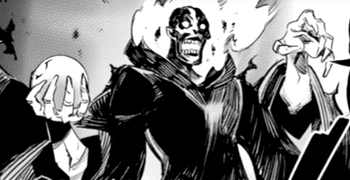 An evil wizard that Heavy Swordsman, Spearman, and Goblin Slayer team up to hunt down together in Volume 4. 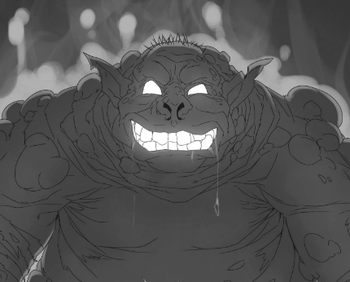 An ugly monster found among the goblins in Volume 6.
Mokele Mbembe 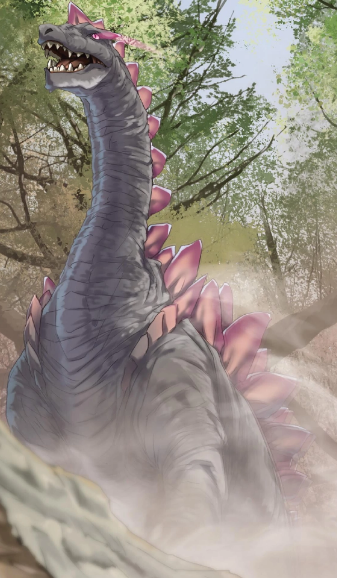 A dinosaur-like entity found in the river of the Elves' Forest Kingdom.
Sea Serpent
A giant serpentine fish that was disrupting fishing spots of a coastal village. Goblin Slayer's party mistakenly agree to hunt it in the beginning of Volume 8.
Sasquatches

A race of man-eating mountainous ape-men. A group appearing in Volume 9 in service of Ice Witch. 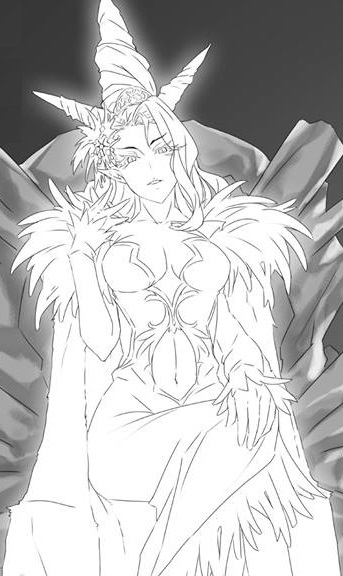 An evil sorceress in Volume 9 who launches a reign of terror in the northern mountains in winter.

Zombies, flesh golems, and sundry other necromantic things that Goblin Slayer's party and other end up fighting in Volume 10.

Another sent by the forces of Chaos to attack the Earth Mother temple in Volume 10.

A rich trader from Water Town who comes to Frontier Town in an effort to corner its wine market through shady means.

The interim ruler of the Desert Kingdom after Desert Princess' parents were assassinated by his Number Two. He attempts to force her to give him the crown.

Guard Captain
The second-in-command of the Prime Minister. He's the one that is raising goblins and killed Desert Princess' father.
Dragons

A large red dragon sleeping in the desert. Desert Regent and his goblins intended to provoke it to rampage as a last resort to conquer Desert Kingdom. Also a large green dragon fought by the Golden Party in Daikatana.

A monster that Priestess fights in Volume 12, on a quest with High Elf Archer, Witch, and Female Knight.

Giant Spider
A monstrous arachnid fought in the sewers of the Chaos-infested city of volume 12. Several slightly smaller ones show in Year One as mounts for dark elves.
Chaos Marine
A huge undead warrior that serves the Giant Eye of volume 12.
Rock Eater 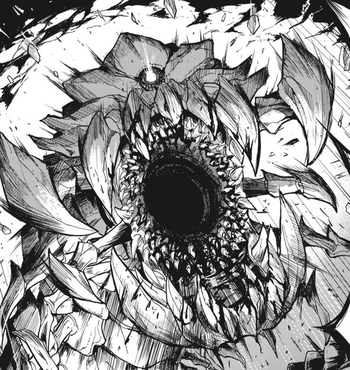 A giant fifty meter long worm/centipede-like creature that serves as the main antagonist to a B-plot in Volume 1 of Goblin Slayer: Side Story Year One. 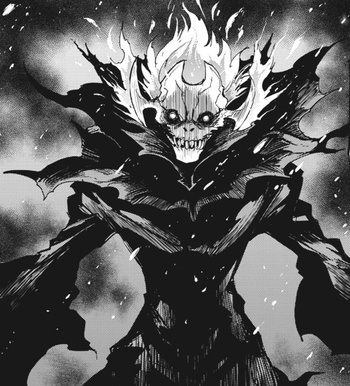 An evil mage commanding a small horde of goblins that was encountered by Young Warrior and Martial Artist's party in the abandoned mines. He later ends up killed by Spearman and Witch. 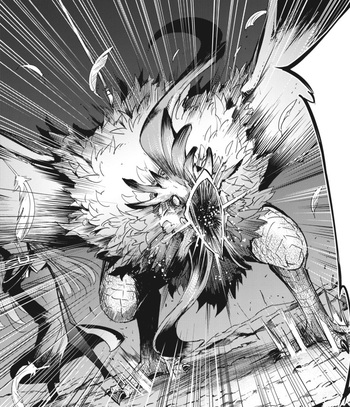 A cockatrice Spearman and Witch run into while on a quest in the abandoned mines.

Dark Elf Cultists
A mob of demon-worshipping dark elves encountered in the B-plot of the third arc of Year One.
Slimes

"Scruffy Men"
Adventurers turned bushwhackers or highwaymen that compulsively murder weaker newbies for more loot.
Ninjas
Black-clad, masked, and lightning-fast hand-to-hand-combatants in the Dungeon of the Dead of Daikatana.
Demons
Evil spirits from the pits of hell that seek to destroy the cities of Man and overthrow the gods. Every adventurer that isn't Goblin Slayer or his supporters considers these to be the principal threat in the setting.
The Demon Lord
The greatest, most powerful of all demons, who exists to bring about the destructive reign of the demon race. While he technically counts as the Big Bad of the world, Goblin Slayer's dedicated focus on goblins relegates him to being the Greater-Scope Villain instead.
The Shade
Some sort of cosmic shadow monster that enters the world riding on a meteor. Chosen Heroine kills it.
Undead King
A lich of phenomenal power, bent on reshaping the very earth and killing thousands to complete a spell of grand design.
Fire Spirit

The ghost of a powerful but arrogant pyromancer that was entombed in a cave connected to the ruins holding the practice dungeon in Volume 13, awoken when a goblin steals his staff from his coffin.

What remains of an apprentice wizard that experimented with duplication magic to disastrous results.