I don't need some motto, some rallying cry.

A Silver-ranked, spear-wielding adventurer who is known as "the Frontier's Strongest", and is partners with Witch. He has difficulty tolerating Goblin Slayer's presence. 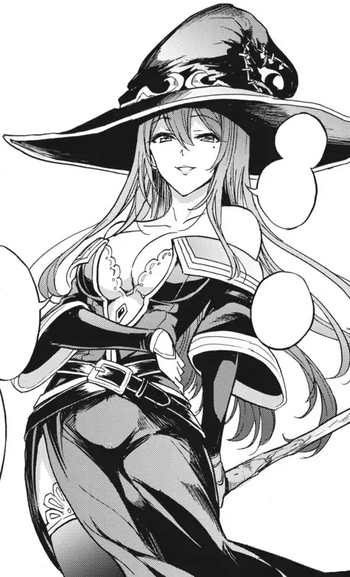 Accompany, eh? It must be quite difficult. He doesn't notice much, does he...?

A Silver-ranked spellcaster who makes up the other half of Spearman's party. A sultry woman, and one of the few adventurers who acknowledge and respect Goblin Slayer's ways. 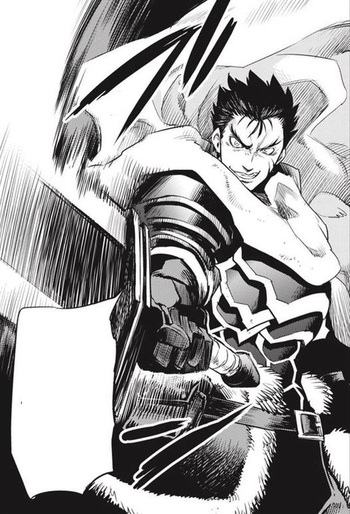 A Silver-ranked, giant sword-wielding adventurer who is frequently partnered with Female Knight. 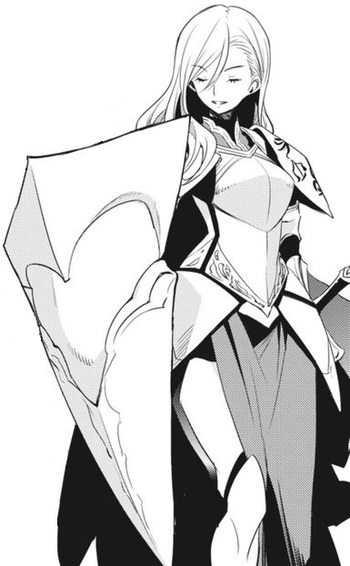 A Silver-ranked Knight who is usually seen accompanying Heavy Warrior. 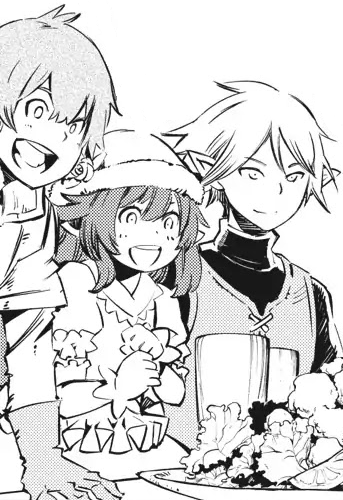 A gaggle of novice or prospective young adventurers who have joined Heavy Warrior's party to learn under him. Consists of Scout Boy, Druid Girl, and Half-Elf Warrior. They often hang out and train with Rookie Duo. 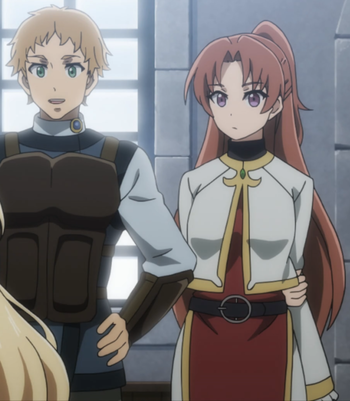 A couple of village kids, Rookie Warrior and Apprentice Cleric, who have formed an adventuring pair-up. They often are seen alongside the Trainee Team in town, either practising together against Heavy Warrior or just hanging out. 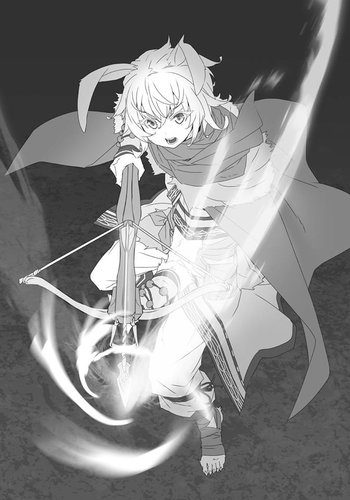 A young bunny-girl whose village in the northern mountains is being preyed on by the Yetis in Ice Witch's employ. 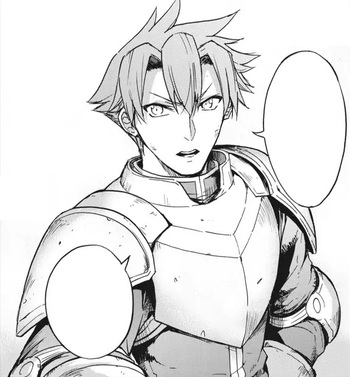 An experienced warrior who started adventuring the same year as Goblin Slayer. Following the disastrous circumstances involving his first party, he wound up striking out on his own. 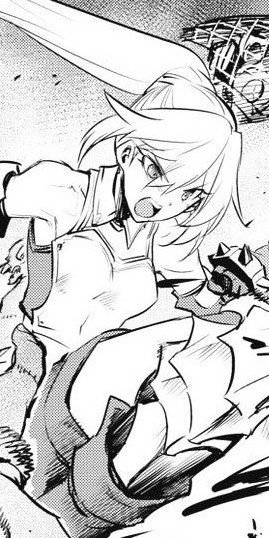 A female high-level adventurer among the veterans that gather to counter the goblin champions in the farm raid. 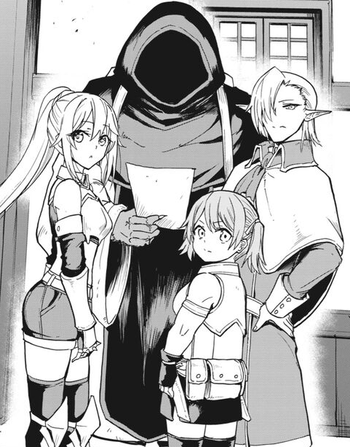 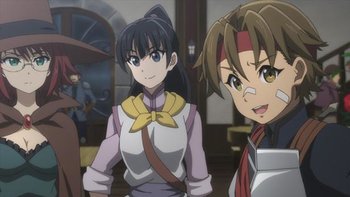 What bright young and ambitious travelers, all set to go on a new quest to discover their destinies, protect the helpless, battle forces of evil— AND THEY'RE GONE!

A just-registered party of New Meat that Priestess joined when she first signed up with the Guild, initially consisting of Warrior, Fighter, and Wizard. They were ill-prepared for a goblin hunt they thought would be easy and were met with horrible results. 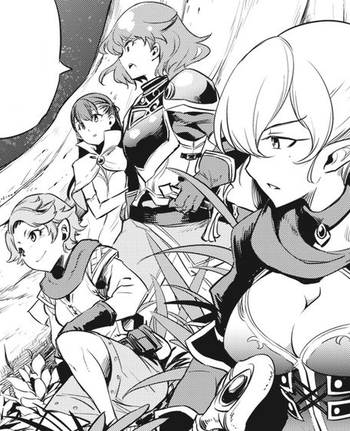 A group of four Steel-ranked female adventurers who attempt to clear a goblin nest in Chapter 4 of Volume 1, with disastrous results. Consisted of Noble Knight, Rhea Ranger, Elf Wizard, and Human Monk. 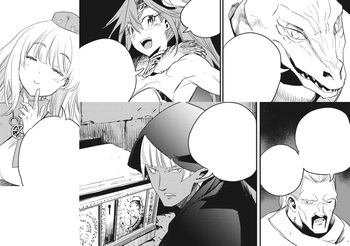 An up-and-coming party of Porcelain and Obsidian ranked adventurers who were hired to clear the area surrounding the training camp of goblins, only to get wiped by a troll in a mausoleum. Consisted of General, Lizardman, Acolyte, Thief, and Warrior-Priest. 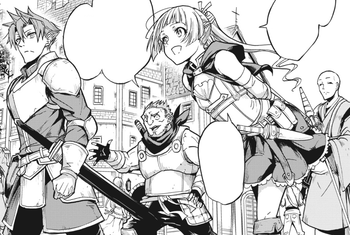 From left to right:Young Warrior, Axe-Dwarf, Half-Elf Ranger and Monk

Young Warrior's former party of Porcelain-ranked adventurers when Goblin Slayer joined the Guild that started out well, but a disastrous mission with a rock eater broke them up. The members were Half-Elf Ranger, Monk, and Axe-Dwarf. 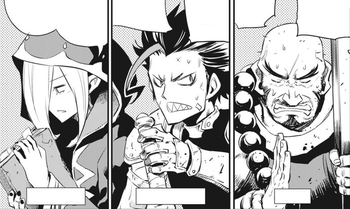 A party of Steel-ranked adventurers hoping to be promoted to Sapphire-rank so they can have access to more lucrative quests. The initial members are Middle-Aged Monk, Half-Elf Warlock, Axe Warrior, and Rhea Scout. Rhea Scout is later replaced by Elf Scout. 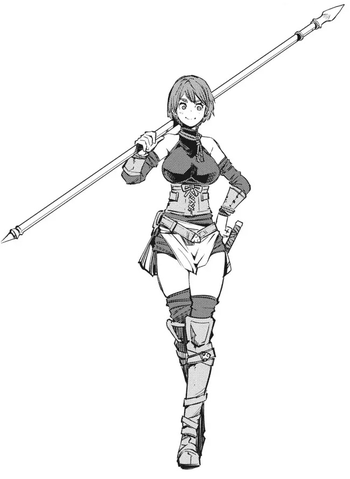 A female adventurer that appears in Chapter 4 of Volume 4 of the light novel and the Brand New Day manga as the captive of a small nest of goblins. 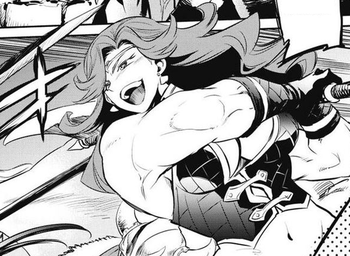 An experienced Adventurer for the Guild.

The woebegone daughter of a retired mercenary. She is the deuteragonist of volume 13, where she struggles to prove herself ready to become an adventurer to escape the constant ill-treatment she experiences in her home village.