Warning: Spoilers may be unmarked 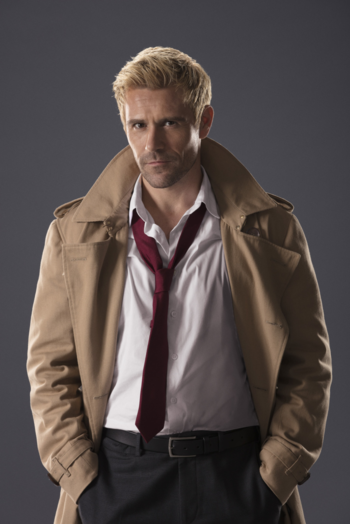 "I'm not a bad guy. A little hardscrabble, sure, but...uh...I'm on the side of the angels, mate. At least when they're not busy trying to screw me over."

Constantine: Well, you know, if we were in each other's shoes right now, then you'd be giving me some rubbish speech about how "you don't have to shoulder the burden myself when I have friends around me to help me carry it". Not that I believe you for a second, but... that doesn't mean it's not true.
Sara: Thanks. Even if you're just lying to make me feel better.
Constantine: Oh, I definitely am. Hope it worked, though.
— In "The Getaway"

Exorcist, Demonologist and Master (''Petty Dabbler'': he's getting new cards made) of the Dark Arts. All trench coat and arrogance, John is the mystical "jackass-of-all-trades" you call when you want some supernatural evil killed or general protection from the forces of darkness. A loner to the bone, on very rare occasions he's willing to work with others for the greater good.

He has quite the checkered past to say the least: Having lost his mother shortly after childbirth and constantly abused by his father who blamed him for her demise, he grew up wanting to see her again and practicing magic. He met a kindred spirit in a girl named Natalie and the two became part of the "Newcastle Crew" (and his former punk band, Mucous Membrane). Eventually, she moved to New York to start a family while John remained in England to work on his sorcery. Some time later, Natalie lost her life in a tragic accident. In an act of arrogance, he decided to perform a ritual to resurrect her.

He succeeded... but it came at a price: namely Natalie's daughter, Astra Logue. Astra was taken to Hell in exchange for her mother, who became so despondent that she killed herself, rendering John's ritual all for naught. To top it all off, Constantine's soul was also eternally damned as a result. Redeeming himself for this act has been his driving force ever since, and in that quest he's made more than a few enemies: The fallen angel Manny, the mysterious Brujeria, Damien Darhk, Baron Reiter, countless demons, and the enigmatic and dreaded demon Neron, whom even the denizens of hell fear at the thought of.

At one point he ended up in Lian Yu and ran afoul of Reiter, where Oliver Queen saved his life. John repaid that favor by restoring the soul of Oliver's friend Sara Lance. Two years later, John found himself working with Sara as he was pulled into the crazy world of the Legends as they called up his expertise to help them fight the time demon Mallus. However, when the Legends smashed through the temporal prison holding back Mallus in a Hot-Blooded attempt to put an end to the demon, they also ended up unleashing every other supernatural horror that was imprisoned alongside him. Despite his loner nature, Neron wanted John dead so he could claim his soul for all eternity, and the Legends were in need of a mystical expert to lock the supernatural fugitives back up. Self preservation triumphed so he very reluctantly joined the team of misfits.

Shortly before defeating Neron with their help, he had been given a chance to save Astra and took it. Unfortunately for him, she was now an adult and blamed him for ruining her family. Rising up the ranks of Hell, she resurrected various evil souls across time to cause misfortune for him and the Legends. Eventually, he confronted her and made a vow to fix what he had broken. While he didn't entirely succeed in the end, she would still come around and make steps to forgive him.

He also at some point had a very interesting/disturbing encounter with a Beebo doll that would "make your toes curl".